Planet of the Apes Wiki
Register
Don't have an account?
Sign In
Advertisement
in: Companies, Marvel Comics

Marvel Comics is a comic book publishing company founded by publisher Martin Goodman in 1961. Marvel is significant for re-invigorating the super-hero genre of serial fiction with notable characters such as the Amazing Spider-Man, the Incredible Hulk and the X-Men – all of whom have become iconic figureheads of modern pop culture. In the Summer of 1974, Marvel, looking for titles for their rapidly expanding black-and-white magazine line, began publication of an 84-page black-and-white Planet of the Apes Magazine.

The magazine was born from a conversation between Marvel's Roy Thomas (who later assumed the rank of Editor-in-Chief of the magazine) and his friend Len Grow - who, at the time, worked in the Topps Chewing Gum Company. Grow believed that, beyond traditional super-hero comics, an editor would have to invest in a regular science fiction title and suggested this to Thomas and, researching the rights to Planet of the Apes, supplied him with the number of Selwyn Rausch, who managed the commercial aspects of 20th Century Fox. Intrigued with the idea, Thomas presented proposals to Marvel's Editor-in-Chief Stan Lee, who encouraged him to continue with the project. Busy with his tasks in the publishing company, however, Thomas postponed the negotiations with Rausch until the beginning of 1974 - when he and Stan Lee read an article published in Variety magazine, that finally convinced them of the commercial potential of the franchise - the five films already had earned $100 million, and there were rumours of the production of a TV series. Fearing the loss of a great chance, Thomas contacted Selwyn Rausch, telling him Marvel wanted to publish a comic inspired by Planet of the Apes and its sequels. Marvel acquired the license, and the first of 29 issues of the magazine arrived on the shelves in the United States in August 1974.[1] Thomas later discovered that the high TV ratings for the Apes film marathon were due in some part to bad weather conditions, which forced viewers to stay at home on that particular night.[2]

Each issue of the magazine featured two to three stories, the first of which was a serialized adaptation of the original Arthur P. Jacobs films. The remaining vignettes comprised entirely unique characters, and took place within an alternate continuity from that of the movies, featuring stunning, insanely detailed artwork by the likes of Mike Ploog, Mike Esposito, George Tuska, Alfredo Alcala, Ed Hannigan, Rico Rival and Tom Sutton, and scripts by Doug Moench - like Terror on the Planet of the Apes, featuring an ape named Alexander and a human called Jason; and the Future History Chronicles. As Moench recalled:"Everything had to be sent to APJAC Productions and I know there were some issues with the art. It was always things like, 'The character can’t look like Charlton Heston.' In the original stories I did with Mike Ploog and Tom Sutton there were never any complaints that I know of."[3] The series also featured articles on the entire Apes saga, and occasionally muddy reproductions of publicity photographs. In September, when broadcasting network CBS launched the Planet of the Apes television series, the Planet of the Apes magazine began including special cast and crew interviews of the series with each issue as well, along with double-page photo spreads. Over it's life, the magazine would not be a spectacular success but it would become one of the longest lasting of the Marvel magazines.

From October 1975 (at about the same time that issue #11 of the black and white magazine hit the stands), Marvel began publication of the Adventures on the Planet of the Apes – a standard-sized 32-page comic book, which reprinted and colorized the movie adaptation stories from the early issues of the magazine. The gray wash shading of the magazine was retouched using the conventional four-color process common to most comic book issues at the time. While the Planet of the Apes magazine ran for a total of twenty-nine issues, Adventures on the Planet of the Apes only lasted eleven before poor sales forced its cancellation in December 1976. An increase in licensing fees prompted the original Magazine's cancellation in February 1977.

The magazine issues were reprinted in many overseas markets including numerous foreign-language translations. Of particular note, the Marvel U.K. comic editions (which printed far less content but were published weekly) included some panels which had been edited out of the original magazines, a huge number of new cover illustrations, and also added a hastily-assembled modification of Marvel's Kilraven strip into a UK-only Apes story - Apeslayer. German reprints (Planet der Affen) featured full-process colourised versions of the movie adaptations (much more effective than the four-colourisation used in Adventures...), but the German run ended abruptly at issue #13, two chapters into the Escape from the Planet of the Apes adaptation. While the German issues also included translations of the original stories such as Terror, they remained in black & white. Mexican issues (El Planeta de los Simios), some with altered covers, reprinted the magazine material, but used their own four-colourisation on both the movie adaptations and on the original stories - the only colourised versions of those stories. French reprints (Planete des Singes) included Doc Savage stories, and featured a number of specially-created cover paintings. Other reprints in Australia (published by Newton Comics), Spain (El Planeta de los Monos), Italy (Il Planeta delle Scimmie), Brazil (Planeta dos Macacos), Portugal (Planeta dos Macacos), The Netherlands (Apen Planeet), Sweden (Apornas Planet) and Finland (Apinoiden Planeetta), used straight-forward copies or translations with only minor adjustments.

Marvel Comics will be publishing a brand new Planet of the Apes comic series beginning in 2023.[4] 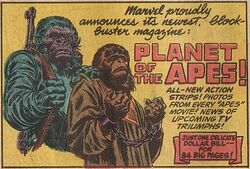 The following creators have served in the capacity of Editor-in-Chief during the publishing run of Marvel's Planet of the Apes titles.

As part of their Captain Britain storyline (1984), Marvel Comics introduced multiple versions of their hero existing in a number of alternative universes. This concept was expanded upon over the years to encompass all of Marvel's characters. According to The Official Handbook of the Marvel Universe: Alternate Universes (2005), all of the Planet of the Apes stories featured in Marvel's comics occured in the reality designated Earth-7481.[5]