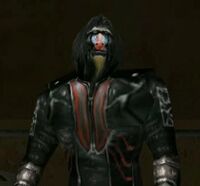 In the PC game, Ulysses confronted a new Ape enemy. The Mandrill Militia seemed to be the equivelent of an Ape police force. General Rakham, mandrill member of the Ape High Council, would seem to be the leader of the mandrills, just as General Ursus led the gorilla army. There may have been some rivalry between the two forces, and Rakham accused Ursus of having bribed his second-in-command. Zaius had arranged for Ulysses to be transferred to the Homonid Monitering Unit at the Mandrill militia station shortly after his capture, but Ulysses had already escaped. Ulysses encountered the mandrills as he sought the parts of the ancient human artifact left to the descendents of humanity.

Retrieved from "https://planetoftheapes.fandom.com/wiki/Mandrill_Assassin?oldid=60205"
Community content is available under CC-BY-SA unless otherwise noted.