Planet of the Apes: Urchak's Folly

Planet of the Apes (video game)

The Mandrill is one of the species of monkeys in the Planet of the Apes franchise. Mandrills are found in western equatorial Africa. Malibu Graphics' Urchak's Folly comic title featured Argo DiVincenzo, a supporter of peaceful ape-human co-existence. He later reappeared in Malibu Graphics' Blood of the Apes. The video game developed by UbiSoft and Fox Interactive featured a 'Mandrill Militia'. 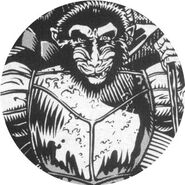 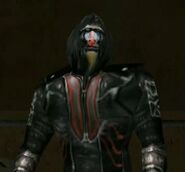 A Mandrill Assassin
Add a photo to this gallery

Retrieved from "https://planetoftheapes.fandom.com/wiki/Mandrill?oldid=59347"
Community content is available under CC-BY-SA unless otherwise noted.