Planet of the Apes Wiki
Register
Don't have an account?
Sign In
Advertisement
in: Companies, Malibu Graphics, Marvel Comics

Malibu Graphics was a comic book publishing house operating between 1986 and 1994. Malibu is most widely known for its in-house studios such as Image Comics, Homage Studios and Adventure Comics. Malibu also produced the "Ultraverse" line of comic titles, which was later purchased by the large Marvel Comics. Image Comics later grew into their own independent publishing house, splitting off several of its studios such as Wildstorm Productions and Top Cow. 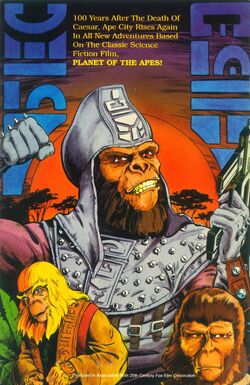 From 1977 until 1990, there were no new Planet of the Apes comics published, despite an ever growing cult fan base. Planet of the Apes seemed destined for a sort of fond limbo until 1988, when 20th Century Fox announced that Adam Rifkin had been signed to write and direct a new Planet of the Apes movie. Malibu Graphics acquired the license from Fox to do new comic stories based on the Apes concept and Charles Marshall was chosen as the writer. His series proposal showed a deft balance of adventure, humor, action and the inevitable parallels to our own modern society. In keeping with its tradition of big-name adventure series, the project was assigned to the 'Adventure Comics' imprint of Malibu Graphics. Artists Kent Burles and Barb Kaalberg were hired to bring Charles’ scripts to beautiful, lush, black-and-white life.[1] The new Planet of the Apes comic series debuted with an April 1990 issue featuring cover art by Dale Keown, now well-known for his work on The Incredible Hulk, and created a small sensation. The issue sold extremely well for the small company (based largely on the cover by Keown and writing by Marshall) and went back for reprinting twice. Forging a bold new strain of Apes continuity, with original ongoing characters and tales, Planet of the Apes ran for twenty-four issues. It was successful enough to keep the series going and inspire several spin-offs, including mini-series' Planet of the Apes: Ape City, Planet of the Apes: Urchak's Folly, and even a bizarre crossover that saw the Apes encounter the 'Tenctonese' aliens of Alien Nation. All of Malibu Graphics' Planet of the Apes projects were published under the Adventure Comics imprint. Malibu’s Apes run was finished by March 1993, but they proved that there was still a market for the material - a fact that must have at least partly inspired the creation of a new Planet of the Apes movie. That movie led to Dark Horse Comics reviving the Planet Of The Apes comics title eight years later. Malibu was purchased by Marvel Comics in late 1994. Ross Richie and Andrew Cosby, who worked at Malibu from 1993 to 1995, would go on to found Boom! Studios in 2005 and launch their own Planet of the Apes comic in 2011.