Maddox commanded a rescue ship which was sent to find astronauts Taylor, Dodge, Landon and Stewart, who had gone missing. Colonel Maddox was accompanied on this mission by John Brent. Maddox and Brent's spaceship passed through a "Hasslein Curve", sending them into the future. The ship made a crash-landing, badly injuring and blinding Maddox in the process. Brent helped Maddox out of the ship and reported the current year to him. Maddox was horrified to hear that they had travelled two-thousand years forward in time to the year 3955 A.D. He spoke of his wife and two daughters being long since dead. Maddox himself died shortly afterwards and was buried by Brent. Maddox was mentioned later in the film when Brent found himself in front of Albina and the other inquisitors in the Forbidden Zone, where Brent says the only ones who came were himself and his commander, who is now dead. 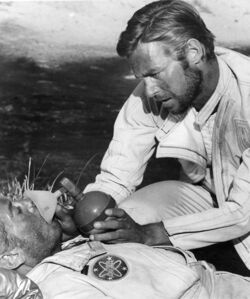 Retrieved from "https://planetoftheapes.fandom.com/wiki/Maddox?oldid=61486"
Community content is available under CC-BY-SA unless otherwise noted.