Planet of the Apes Wiki
Register
Don't have an account?
Sign In
Advertisement
in: APJ Characters, Marvel Characters, Chimpanzees,
and 8 more

Lucius appeared towards the end of the original movie Planet of the Apes (1968). Zira's teenage nephew, he rebelled against authority of any kind and willingly helped Zira and Cornelius in leading George Taylor to freedom. He resented Taylor's orders as much as anyone else's and struggled to understand the actions of this unusual human while they traveled through the Forbidden Zone together. 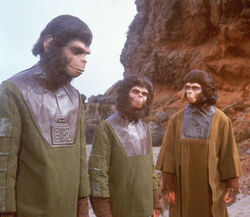 In BOOM! Studios' Planet of the Apes Cataclysm, Lucius' past is explored more fully. His mother, Cassia, was killed when the destruction of Earth's Moon caused a huge wave to hit Ape City, eight years before Taylor's arrival. Zira then looked after the young chimpanzee with the help of the "Anti-Vivisection Society" leader Prisca. After Milo had repaired Taylor's ship using spare parts from Brent's ship, Lucius accompanied Zira and Cornelius into the Forbidden Zone, but was shot by the gorilla soldiers before he could join them on their momentous journey on the Icarus.