Planet of the Apes - Reimagined

Planet of the Apes (2001)
Lola is General Thade's sister, and presumably the daughter of Zaius.

Not much is known about her except for the fact that she has a daughter, and that she accompanied General Thade to Limbo's compound, where he was purchasing a small human girl as a pet for his neice. As Zaius' daughter, she would have been a direct descendent of Semos. 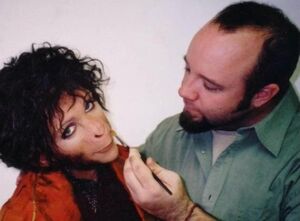 Retrieved from "https://planetoftheapes.fandom.com/wiki/Lola?oldid=43304"
Community content is available under CC-BY-SA unless otherwise noted.