Planet of the Apes Wiki
Register
Don't have an account?
Sign In
Advertisement
in: Orangutans, APJ Characters, Marvel Characters,
and 7 more

Planet of the Apes: The Long War #1

"In the beginning, God created beast and man, so that both might live in friendship and share dominion over a world at peace. But in the fullness of time, evil men betrayed God's trust and, in disobedience to His holy word, waged bloody wars...not only against their own kind, but against the apes, whom they reduced to slavery. Then God, in His wrath, sent the world a savior, miraculously born of two apes who had descended on Earth from Earth's own future. And man was afraid, for both parent apes possessed the power of speech. So both were brutally murdered. But the child ape survived and grew up to set his fellow creatures free from the yoke of human slavery. Yet, in the aftermath of his victory, the surface of the world was ravaged by the vilest war in human history. The great cities of the world split asunder and were flattened. And out of one such city, our savior led a remnant of those who survived in search of greener pastures, where ape and human might forever live in friendship, according to divine will. His name was Caesar, and this is his story in those far off days. … We still wait, my children. But as I look at apes and humans living in friendship, in harmony and at peace, now some 600 years after Caesar's death, at least we wait with hope for the future."
―The Lawgiver

By the time that the Lawgiver appeared at the beginning and end of Battle in a flash-forward to the year 2670, the children whom he addressed (as he narrated the story of Caesar) were a mix of both humans and apes; the joint society Caesar ultimately promoted appeared to have succeeded, and instead of condemning humans, the Lawgiver had accepted them as his students. When asked by a human child who would know about the future, the Lawgiver quotes that the dead would know. The tear shed by the statue of Caesar at the end of the film is an indication that his efforts would ultimately fail. Since The Lawgiver spoke of "evil men who betrayed God's trust", it is possible that zealots perverted his peaceful teachings over the centuries following Battle. (APJ: Battle for the Planet of the Apes) 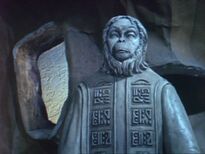 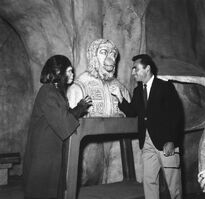