Planet of the Apes Wiki
Register
Don't have an account?
Sign In
Advertisement
in: Humans, Mutants, Deceased Characters,
and 9 more

Chief Inspector/Governor Kolp was a government official, and later leader of a band of mutants, in the original Planet of the Apes movie series. Kolp appeared to be second in command to Governor Breck in the leadership of Modern City.

In Conquest of the Planet of the Apes, despite being a background character, he is the secondary antagonist of the film (having caused both Armando's death and personally giving the order to kill Caesar). In Conquest, Kolp displayed himself as sinister, but in a detached, matter-of-fact manner, who shows almost no emotion at all. Based on his personality traits, it is fairly safe to assume that Kolp is either a psychopath or a sociopath. Kolp was fiercely loyal to Governor Breck and appeared to be his second-in-command. Kolp is shown to have a great hatred of apes, particularly Caesar (especially in Battle for the Planet of the Apes) and attempts to kill every last one of them, paranoid that they will return to kill all the humans once and for all. Kolp is also painted as a megalomaniac who is obsessed with power. Despite this, Kolp did appear to genuinely care for the safety of his people. However, Kolp was willing to kill the humans living in peace with the apes to secure his own group's survival. It appears that, following the nuclear holocaust, Kolp lost whatever was left of his sanity (worsened by radiation exposure) and desired only to be on a warpath until he could be the ultimate savior and ruler of civilization. Had he succeeded, Kolp planned to enslave the apes once again, just as Breck had done initially. At one point, Kolp says that twelve years of peace has been "boring" and delights at the thought of going to war with Caesar's army simply to give him something to do. The poster for the film claimed that Kolp had been driven mad from radiation.

In Conquest of the Planet of the Apes, Kolp was Chief Inspector of the "State Security" secret police organization under Governor Breck. Kolp and Inspector Hoskyns interrogated Armando, which Armando ended by throwing himself through a high window, rather than confess what he knew about Caesar under hypnosis. Later Kolp tracked down the originating shipment that had carried Caesar to Ape Management; he deduced that Caesar had sneaked himself into the shipment, to appear to have wild origins. Kolp was also present when Breck interrogated Caesar, strapped to an electroshock table, and he gave the order for Caesar to be electrocuted, once it was proven that Caesar could speak and reason.

Kolp survived the "Night of the Fires," when the apes revolted and took over, and also the nuclear war mankind then unleashed, all but destroying themselves in doing so, while the apes escaped to the wilderness. Although Governor Breck himself died during the war, much of the city's governing staff were relatively safe in underground fallout shelters and bunkers; nonetheless, lingering background radiation began to cause physical mutations in the survivors. By the fifth movie, after Breck's death, Kolp had inherited the remnants of the human population of the city, and styled himself "Governor," and was paranoid about the apes returning to finish the destruction of humanity. 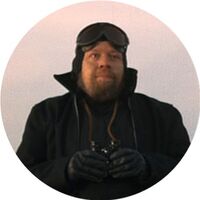 Twelve years after the end of the war, Caesar, Virgil and Mr. MacDonald revisited Ape Management (now called the Forbidden City by the apes), in hopes of finding old video recordings of Caesar's parents. Kolp's agents discovered their presence, and Kolp assumed they had come scouting for things to loot or reconquer. Shots were exchanged as Caesar, MacDonald and Virgil fled, and scouts tracked them back to Ape City. With the city's location known, and jealous of the relative health and prosperity of the apes and the humans living with them, Kolp decided to marshal his forces and conquer Ape City. At this point, Kolp was not only mad, but also vengeful. When his second-in-command Méndez pointed out to him that attacking the Ape city would constitute a direct violation of years of peace, Kolp's answer was that of a deranged state-of-mind: "Yes, well things have gotten rather boring around here now, hasn't it."

Kolp supervised the attack personally, telling his troops to leave Ape City looking "like the city we came from," and to do their worst. When it appeared Caesar was defeated, Kolp personally taunted him with a revolver, nearly breaking Caesar's spirit, until a cry from his wife Lisa restored it. Beaten and dying in the ape counterattack, Kolp sent back the order for the mutants' last-resort weapon, the Alpha-Omega nuclear missile, to be fired at Ape City. Kolp was killed while retreating, by Aldo and his Gorilla troops. His lieutenant, Méndez, subsequently cancelled the order, deciding the best thing to do was to retreat and live in peaceful coexistence with the apes and above-ground humans.