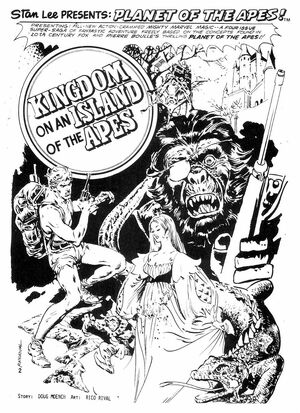 New York, about 1973 - eccentric young scientist Derek Zane believed that the ship carrying Taylor and his crew had been propelled into the future and constructed a time machine in his apartment with the intention of rescuing the astronauts. Derek was so engaged in his work that his girlfriend Michelle left him. Depressed, he flew the next day to Houston, Texas, to meet with a NASA executive named Krigstein. Zane told Krigstein about his time machine, his fascination with Otto Hasslein's theories and his belief that Taylor's crew disappeared into a time warp. When Krigstein scoffed at his ideas, Zane returned home to activate the machine to the time in which he believed he would find the astronauts, and disappeared.

Fast forward to the year 3975. Zane arrived in the Forbidden Zone but his machine was in his apartment on the fifth floor and, 2000 years in the future, Derek was at fifth-floor height in an empty space and his machine crashed and was destroyed. He survived the crash and found himself trapped forever in the future. Derek began a journey to find Taylor's crew. He discovered primitive humans as they grazed in silence, unable to elicit a response from any of them. Shots disturbed the tranquility, scattering the mute humans and nearly killing Zane. To his horror, the shooter was a gorilla on horseback. The eye-patched ape, General Gorodon, was frustrated when Zane got away, for he'd spied the man's attempts to communicate with the humans and had hoped to impress his orangutan elders by capturing a talking human. Zane followed Gorodon, intent on retrieving his belongings. Freeing the humans, he stole a horse and escaped. Riding through the night, he knew he had no real hope of finding Taylor. He built a raft, which carried him and a cache of gunpowder barrels to a distant island visible from the ocean shore. Bent on revenge, Gorodon took 200 gorilla soldiers and set out to track Zane down. 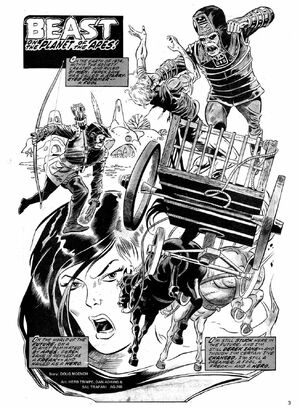 Taken by Sir Gawain to the Camelot court of King Arthur, Zane learned the island was called Avedon, home to a medieval court of humans and apes living in peace. A beautiful princess named Lady Andréa visited him, admitting the whole medieval act was mere affectation on their parts; long ago, she said, her people left behind the hate-filled society of the mainland to build a civilization of honor and peace based on ancient writings. Newly-knighted 'Sir Derek' became a part of Avedon's culture over the next several weeks, falling in love with Andréa. Warned of Gorodon's attack, Zane instructed the others to set up gunpowder traps and shoot fiery arrows at them when the gorillas arrived. Ultimately, it came down to a face-off between Gorodon and Zane, sword against empty rifle. Zane felled his enemy once and for all, and normality returned to Avedon over time. Zane and Andréa wed, and he realized he had finally found what he always sought his whole life: his dreams.

Though happy with Andréa in Camelot, Zane could not shake his guilt over abandoning his search for Taylor. Bidding farewell, he met a chimp named Robin Hood, who agreed to help him. On the mainland, Hood and Zane visited Dr. Cassius, pretending an ape from another village had sent them. Cassius' assistant told them about a talking female human in their captivity. Zane perked up, hoping he had found Lt. Stewart from Taylor's crew, but it wasn't her. Cassius prepared to remove her larynx for study, but Zane begged him not to kill her. Astonished at his use of speech, Cassius was distracted long enough for the woman to grab a scalpel, kill Cassius and cut Zane free. They ran for the door and escaped across a stone causeway. Hood pulled Zane into a wagon. The girl cried out Zane's name and ran for the wagon, but was shot down in his arms. Saddened, Zane fired a burning arrow into the armory, blowing it up, then rode out of town and buried the girl, whom he named "Hope". Hood suggested they return to Avedon but Zane felt he could no longer stay there, for his destiny lay elsewhere. [2]

In Journey to the Planet of the Apes, a week after leaving Hope's graveside Zane stumbled upon a group of gorilla soldiers. Led by Jurando, the gorillas had been hunting a chimpanzee heretic named Faron. Escaping and taking refuge with a group of primitive mute humans, Zane discovered Faron, who had been hiding inside their cave for months. He was wanted because he spoke about a society of apes who lived like ancient humans once did. Zane agreed to help Faron escape if Faron would take him to the technologically advanced apes who might help him build another time machine. Back in 1977 (36 months after Zane disappeared in early 1974), NASA's Dr Krigstein prepared to launch a rescue mission to 3977 A.D. Realizing that he was wrong to disbelieve Zane, Krigstein used the 'Temporal Displacement Module' blueprints found in Zane's apartment to build a functioning time machine - the Chronos I. Two 'tempunauts' - Mara Winston and Jackson Brock - went through a "psychedelic" time trip during which the machine was damaged slightly. Finding a barren wasteland, Brock demanded they travel back half-way - to 2977. He had volunteered only for the opportunity to find out the secrets of future trends in stocks, politics, industry, fashion, etc. and make his fortune. Winston refused to go back with him and he operated the controls alone, but the machine exploded and badly injured him. Winston nursed him back to health for three days, but just as he came around, they were discovered by Jurando's gorillas. The soldiers had also captured Faron, leaving the apparently primitive Zane behind. Zane planned an elaborate rescue and he and Faron fled by horse for three days until they reached a twentieth-century city encased in a bubble dome. Inside was a society of apes dressed in twentieth-century human clothes and driving cars.

In his outline for this new story, Doug Moench described the dome society as a "second-guess of what the next movie might be like, but it's also similar to Pierre Boulle's original novel". As to what became our heroes, Mara Winston would go on to team up with Zane and Faron, and Faron would find a chimp girlfriend within the dome. Brock would use his cunning to assemble an army of renegade gorillas - one of many bad-guy factions. A possible sub-plot would involve Lady Andrea, Sir Gawain, Robin Hood & King Arthur on Avedon. Moench envisaged "a number of successive 'movie' [-type] sequels. In other words, after eight or ten chapters of 'Return',[sic] I plan to begin anew (but continuing with most of the same characters) with 'Beyond the POTA' in which our main characters blast off for another planet - apes in spacesuits - up against aliens (instead of more mutants) with rayguns, etc. Whereupon (after we conclude a 'John Chimper of Mars movie') our characters would be ready for a return to Earth - but maybe a return back to 1976, rather than their intended 3976. After that, of course, Zane would decide he's still a misfit in his own milieu, get homesick for Lady Andrea back in Avedon circa 3976, build himself yet another time machine, and... ad infinitum. Of course, this wouldn't happen until about issue #60 or so - if we're all still alive by then..."[3]

Retrieved from "https://planetoftheapes.fandom.com/wiki/Kingdom_on_an_Island_of_the_Apes?oldid=40830"
Community content is available under CC-BY-SA unless otherwise noted.