Planet of the Apes Wiki
Register
Don't have an account?
Sign In
Advertisement
in: Actors, Female Production Crew Members

Behind the Planet of the Apes

Kim Hunter was born Janet Cole to Donald Cole and Grace (nee Lind) in Chicago, Illinois in 1922, and lived there until she moved to Miami Beach with her family at the age of ten. She began acting as early as 1939 playing the role of Penny in Penny Wise. The Summer after Graduation from High School, she was the ingenue with a stock company in Flat Rock, N.C. Subsequently she appeared in stock in Miami Beach and Coral Gables, Florida and Hendersonville, N.C. and others. David O. Selznick put her under contract for a three year period, but insisted on a change of name. Janet Cole and Selznick's associates Val Lewton and Jacques Tourneur had a brainstorming session where they compiled a list of possible first names and surnames; Selznick then chose a combination from the two lists. 'Kim Hunter' subsequently appeared in such films as The Seventh Victim (1943), Tender Comrade (1943), When Strangers Marry (re-released as Betrayed) (1944) and You Came Along (1945). After these, she worked with film-makers Michael Powell and Emeric Pressburger in Britain for J. Arthur Rank, on films including A Matter Of Life And Death (released in the US as Stairway to Heaven) (1946) and the US version of A Canterbury Tale (1949).[1]

In 1947, Elia Kazan cast her as Stella Kowalski in Tennessee Williams' A Streetcar Named Desire for which she was honoured with the Donaldson and New York Drama Critics Awards. Repeating the role of Stella in the 1951 film version, her first major Silver Screen project, she won the Academy Award for Best Supporting Actress, the Look Magazine Award and the Hollywood Foreign Correspondants Award. She also won the 1952 Golden Globe Award for Best Supporting Actress in a Motion Picture for the same film.[2] 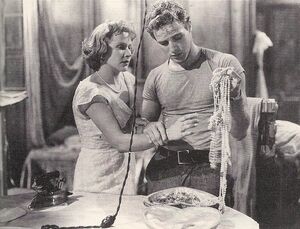 In the early 1950s, the 'House Un-American Activities Committee' (HUAC) began investigating ties to communism within the Hollywood community. Hunter, along with hundreds of other working actors, directors and writers (including future Apes actors Jeff Corey, John Ireland, Victor Kilian and John Randolph, and screenwriters Michael Wilson and Howard Dimsdale) was blacklisted and prevented from working in her chosen field. Although blacklisted, Hunter was not a member of the Communist Party, simply a campaigner for civil rights and a sponsor of a 1949 World Peace Conference in New York. Miss Hunter returned to Broadway to play opposite Claude Rains in Darkness at Noon. The theatre also claimed her for The Chase, The Children's Hour, The Tender Trap, Write Me A Murder and many other plays. Among her film assignments were Anything Can Happen, Deadline USA, Storm Centre, Bermuda Affair, Money Women And Guns, The Young Stranger and Lilith. 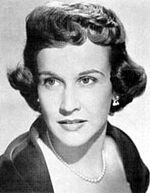 Hunter's most notable role in Hollywood was in 1967 when she auditioned for the role of Zira, a chimpanzee physician featured in the Arthur P. Jacobs film Planet of the Apes. She had known Jacobs for many years: "he had been my press agent before he went into making films. So he was an old friend, very much so."[3] Hunter's character was a prominent figure in the film and she played opposite British thespians Roddy McDowall and Maurice Evans. Like them, she found the arduous makeup routine difficult: "I had to take a tranquiliser every morning when I sat down in that make-up chair - it was so completely claustrophobic. After a few weeks I said, well, now you're used to the whole thing, you shouldn't need this crutch any more. One morning I didn't take it, and my make-up artist, Leo Lotito, said to me after that session, 'If you don't take one of those tranquilisers every morning from now on, you'd better get another make-up artist. I won't touch you again.' He practically had to hold me in the chair that morning!" "On the other hand, a kind of marvelous thing happened during that three and a half hours. It served to give us a period of adjustment, going from human to ape. By the end of the make-up time, you believed, you really did, that you were an ape. You'd look in the mirror and say 'By golly, that's me.'"[4] Hunter remembered in a 1995 interview: "It was pretty claustrophobic, and painful to a certain extent. The only thing of me that came through were my eyeballs." Hunter spent a considerable time at the Los Angeles Zoo in preparation for Planet of the Apes - learning how apes kiss. "They kiss somewhat as we do, but not exactly. With apes, it's more a biting of the lips, and a caressing, rather than the solid contact humans prefer to make. Anyhow, it's really very dear." This was in order to realistically portray the few kissing scenes shared by Zira and Cornelius, which she nevertheless found difficult to make convincing: "It's all very antiseptic and mechanical, and we had to work hard to get a romantic effect. We had no actual physical contact with each other, you see. You might say that it was something like modern dancing."[5]

Hunter also noticed some strange side-effects: "I recall in the making of Planet of the Apes, while we were waiting for good weather - one of the few times that we had that problem in the first one, we were at the beach and the fog rolled in, and we did need the sun. I went up and I took a nap. In this makeup, the only way you can possibly take a nap is to lie flat on your back. Otherwise you're apt to hurt the appliances. I went absolutely sound asleep, which I rarely did. I woke up I think with one of the worst nightmares of my life. Because you see, even asleep, your subconscious is aware of what is on, of these appliances that are on your face. In my dream, I knew that from the neck up I was a chimpanzee. My panic was that I couldn't see over the face to find out if the rest of me had become a chimpanzee, whether I was human from the neck down, and I was never so frightened in my life. Because I mean from the neck up I was not in makeup - I was a chimpanzee, in my dream. I woke up and I was shaking. It took quite some time to find myself again." Of all the films she made, she liked playing Stella more than anything else, but she said that the "crazy, imaginative freedom of Planet of the Apes" ranked it a close second.[6]

Hunter reprised the role of Doctor Zira the following year in the film's first sequel Beneath the Planet of the Apes. Her role in this film was minimal, appearing in only a few key scenes, but she still needed some persuasion because of the experience of the Ape makeup: "The second one they had to talk me into - I mean, they really had to talk me into. They said 'Look, it's only ten days' work and it's continuity. Please!'"[1] However, Kim had to spend four weeks more than planned because of production problems - originally, her role would have only taken a week to shoot; "'Beneath' I was on longer than expected because the weather was cockeyed and most of my stuff was outdoors."[1] She found this movie more difficult to work on than the first one, which had a "special, experimental nature that was exciting." The second one, she said, was "pure melodrama," and that "whatever is said was lost."[6] Although Hunter had very little screen time in Beneath, she proved to be an important character, showing her admonition of the reigning ape government and openly protesting the ape council's fascist paradigm. Ironically, this was not dissimilar to Hunter's own actions when speaking out against the Hollywood blacklist.

Hunter played the role of Zira for one more film, 1971's Escape from the Planet of the Apes. Unlike previous appearances, Hunter now played one of the primary characters in the film, reuniting with actor Roddy McDowall. She was more enthusiastic about this movie than it's predecessor: "On the third film, the story was good enough for me to want to come back, even though I still had reservations about the makeup!"[1] "When the third script came, I couldn't say no to that. It was just too fascinating."[3] Escape gave Hunter the opportunity to experiment with different facets of Zira's personality, including a quirky, humorous side. This was Kim's final role in the series, as the character of Zira was killed off in the film's climax. She adored the role of Zira in Escape, saying it was "more fun to do" because of the better story, characters, and dialog, but the joy was somewhat mitigated by the need to rise daily at four in the morning for three and a half hours of arduous make-up and by the pain of removing the facial appliances at night in a 90-minute dressing room ritual.[6] She was content to end her Apes adventure at that point: "I was very glad I got killed on the third one! For me, three was enough, thanks a lot." "I saw the fourth one, Conquest of the Planet of the Apes, and I was 'mezzo e mezzo' about it, so I never did see the fifth."[1] In fact, Hunter was also asked to take part in the Planet of the Apes TV series. "They asked me if I would do a guest shot on the TV series."[1] "Nobody told me what the role was or might be. They just asked me if I would join them and I said no, thank you. And as I have said many times since, I loved making the Apes films but thank God I was killed in the third so I wouldn't have to go through that make-up process again!"[7] In recognition of her experience, Kim Hunter presented the Academy Award for best makeup to Rick Baker in 1982.

Asked if she had any aspirations, at the time of her acclaim in A Streetcar Named Desire, toward becoming a Hollywood superstar, Hunter said "In the back of my mind, I think I felt that if that kind of stardom had occurred, I wouldn't have fought it. But such stardom often happens through extraordinary luck or an extraordinary personal quality or an extraordinary drive in a human being. One can always hope for luck, but I don't have that kind of annihilating drive as a human being. You know, 'Out of my way, here I come.' I'm not that kind of a person. And the other thing is, it's just not my way of performing, I don't go into a role saying 'I'm going to take what is me and make that the most important thing in the part I'm playing.' I do work from myself and use all of myself but I don't take any personal quality and try to find the character to portray it. It's an image thing, I just want to do the best I can with the given, in life or in work."[8] Kim Hunter, who was married to writer Robert Emmett and was the mother of a daughter and a son, passed away in New York from a heart attack on September 11th, 2002 at the age of seventy-nine.