Actress Karin Konoval played the role of orangutan Maurice in the 2011 movie Rise of the Planet of the Apes. Konoval was born in Baltimore, Maryland. Her film and TV credits include The X-Files (1995-96), Millennium (1997-98), The Outer Limits (1998), Stargate SG-1 (2003), the lead role in the feature Cable Beach (2004, for which she received a Philip Borsos award), Scooby Doo 2: Monsters Unleashed (2004), the mini-series Tin Man (2007), Supernatural (2009) and 2012 (2009). She has also received numerous awards and nominations for her work in theatre, her writing has been published in various anthologies, literary magazines, and broadcast on CBC Radio, and her artwork exhibited in Vancouver. 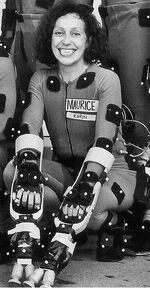 Retrieved from "https://planetoftheapes.fandom.com/wiki/Karin_Konoval?oldid=20932"
Community content is available under CC-BY-SA unless otherwise noted.