Planet of the Apes Wiki
Register
Don't have an account?
Sign In
Advertisement
in: Humans, Female Characters, Living Characters,
and 5 more

Battle of the Titans
Judy Franklin survives the Venturer crash, only to disappear shortly afterwards in mysterious circumstances. When Bill and Jeff eventually find her, they discover she has been kidnapped and brainwashed by the Underdwellers, the underground mutant population, who believe she is a long prophesied saviour called 'Usa' (they have seen a statue dedicated to her after the Venturer's disappearance, bearing the title 'USA'). The mutants powers are too strong for Judy to be rescued and instead she agrees to return whenever needed by 'her people'. This does happen when they require the astronauts help in saving their city from a volcano. Judy is also the only one able to fly the world war two fighter plane restored by the apes and stolen from Urko. 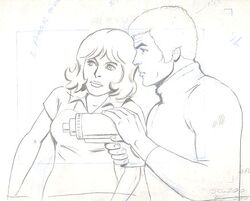