Husband-and-wife team John William Corrington & Joyce Hooper Corrington were the authors of the screenplay for Battle for the Planet of the Apes. John had a background in writing poetry and novels before he and his wife Joyce - both professors in New Orleans, John in English and Joyce in Chemistry - moved on to movie screen-writing in the late 1960s. Among their screenplays were The Omega Man (1971), starring Charlton Heston - the second of his three classic sci-fi films, after Planet of the Apes (1968) and before Soylent Green (1973).

Originally, Paul Dehn's story outline for the fifth Apes film was titled The Battle for the Planet of the Apes and was submitted 5 July 1972, but had a very different concept to the completed movie. After Dehn's departure from the project, the Corringtons were given his story treatment as a reference point,[1] but their first draft story outline submitted 4 September 1972, titled Epic of the Planet of the Apes and credited solely to them, was significantly different and closely resembled the story that was ultimately filmed. The screenplay finalised in December 1972 used Dehn's title and credited him with 'original story', while the Corringtons were credited with 'screenplay'. In the late 1970s the Corringtons turned to writing for several soap-operas, which they continued to do up until John's death in 1988.

Interviewed for a retrospective featurette in 2008, Joyce Corrington pondered whether the conclusion of Battle... meant that the future - as seen in the first film - had been changed: "Are we caught in this time-line that goes again to destruction, or are they going to do better? ... At the end, you do see the ape children and the human children playing together, but then in the background we had a couple of little kids fighting, an ape and a human child fighting, indicating that there's still going to be a struggle. We don't know for sure. We hope we're in a new time-line, we hope we're not going to destroy ourselves, but the potential is still there."[1] 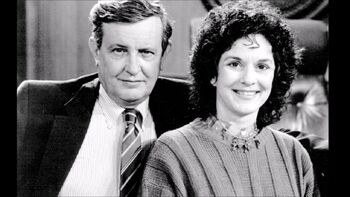 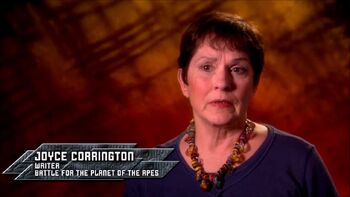