Planet of the Apes Wiki
Register
Don't have an account?
Sign In
Advertisement
in: Article stubs, Visionaries Characters, Humans,
and 4 more 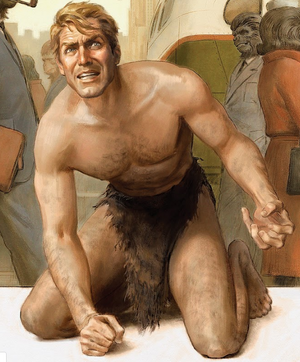 John Thomas is an astronaut who along with his companions, Stewart, Paul LaFever, and Dodge traveled from Earth to an unknown planet.

Thomas and his companions awakened from their vessel to find themselves in a strange new world. After burying Stewart, who died during the journey, they take a vehicle deeper into the wilds. The group discover a series of scarecrows blocking their path, taking a detour their vehicle sinks in a swamp, nearly drowning Thomas. The group find a beach where they wash themselves and also encounter a tribe of primitive humans.

They are ambushed by hunters who are apes, one shot Thomas in the throat injuring him, rendering unable to speak. While the apes planned on killing him for sport, noticing his clothes they believe him to be a tamed man and thus sell him to a research institute.

At the institute he makes an acquaintance with Zira, the doctor in charge of his ward. However she sees him nothing as an animal and moves on. Trying a different tactic, Thomas uses his own blood to write that he can speak before collapsing. He later attempts to escape from his cage only to be caught and sprayed with a hose, washing away his message. Thomas tries to get Zira's attention by grabbing her pen only to be beaten by a gorilla handler. This behavior attracts the interest of Zaius, who believes him to be a trained man and plans to have his brain dissected. During feeding time, he manages to escape the institute ans sneak aboard a truck. He sees that city where intelligent apes are walking about. When he leaves his hiding place, he is spotted and chase to a park where he attempts to gesture he can speak only for the crowd to laugh. A nearby gorilla handler recognizes he and quickly subdues and brings him back to the institute. Zira meets with Thomas again under guard, however he manages to steal her pen and pad while the other gorillas are beating a agitated man. He writes that he is a man from Earth. He manages to convince the chimpanzee of his origins and helps him find the fate of Lafever, who to his shock has suffered brain damage during the hunt.

When Zira's attempt to convince her peers of his intelligence, Zaius takes Thomas to perform a brain surgery. He is saved from being lobotomized after he finally manages to speak. He is later brought before the Congress where he demonstrates his abilities and tells his story. He is freed an recognized as an intelligent being, given a fresh suit and clothes, and later becomes a celebrity.

At a meeting with several ape scholars he ask the apes why they are limited to a small region in the continent. When he is brought up to speed about the radioactivity, one ape brings the topic of nuclear warfare from Earth. Thomas explains that that was the case in the past in which an A-Bomb was used, however an ape raises a question who civilized humans from Earth can be if they used one.

Later Thomas visits a museum with Cornelius and Zira and is horrified to discover Dodge stuffed and mounted in a museum. Seeing the desecration of his friend's corpse he calls them animals and rushes to the zoo where his friend LaFever is kept only to find his cage empty. In despair Thomas cries, but Cornelius appear and assures him that he is being treated at a hospital. Still furious at his friend's treatment, he calms down realizing this is the norm for apes in treating animals.

In a discussion with Cornelius he questions apes ascendance from animal state and man's treatment. At a party Thomas has become drunk having tired of being treated like a sensation rather than a person, as the apes are always asking him to speak. He is brought back to his apartment by Zira, where he a woman who he names Nova is kept chained to a wall. Giving her a set of clothes he tells her to be a human. Thomas invites Zaius and Zira to tea, though he is running late as he is taking a walk with Nova. Upon his return it's shown that Nova has transformed into a woman, now dressed and even speaking.

The name John Thomas may be a reference to John Thomas Scopes, defendant in the famous "Monkey Trial" in Dayton, Tennessee in 1925. The trial inspired the play/movie Inherit the Wind, which was spoofed in one scene of the 1968 Planet of the Apes film.