Planet of the Apes Wiki
Register
Don't have an account?
Sign In
Advertisement
in: APJ Characters, Marvel Characters, Humans,
and 6 more

John Christopher Brent was an American astronaut who at some point lived in New York City.[2]

Working alongside his skipper, Brent piloted a reconnaissance ship which was assigned to trace the trajectory of George Taylor. Taylor's own space vessel had passed through a time distortion affect (known as a Hasslein Curve), and was propelled forward into the future to the late 40th century. Maddox and Brent's ship crash-landed back on Earth not far from the location where Taylor's ship crashed only months earlier. Analyzing the ship's time readouts, he believed that he had arrived in the year 3955.[3] Shortly after landing, Maddox died, and Brent was forced to bury him in a shallow grave near the crash site.

Soon after, Brent came into contact with a mute human female named Nova, fleeing from whatever took Taylor. He saw that Nova was wearing Taylor's dog tags and questioned her as to his whereabouts. Nova however, was unable to communicate with him but understood his intentions when he mentioned her dog tags.

The two traveled together, and eventually made their way to Ape City. Brent was horrified to discover that the entire planet was ruled by a society of militant apes. A squad of gorilla soldiers discovered them and one of them shot Brent in the shoulder. Nova and he managed to escape, and they sought refuge in the home of Dr. Zira and her archaeologist husband, Dr. Cornelius. Upon seeing Brent, the two chimpanzees first mistook him for Taylor until he revealed his name. Zira was astonished to find yet another talking human. She nursed Brent's gunshot wound, and Cornelius showed him a map with directions leading away from Ape City.

At Zira's insistence, Brent donned clothing more suited for contemporary humans (a tattered loincloth), as well being warned by Cornelius not to speak because of the consequences and took off along with Nova. The gorilla soldiers soon captured them however, and brought them back to Ape City. Zira attempted to have the two prisoners transferred to her Animal Hospital, but gorilla leader, General Ursus, told her that they were to be used for target practice. Zira aided them in escaping custody and Brent and Nova were on the run yet again. 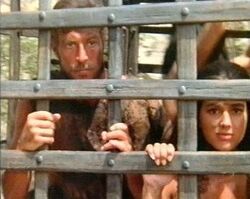 They continued travelling for several days – following the route indicated on Cornelius' map. Within time, they arrived at the devastated ruins of a great city. Climbing down into an underground cavern, Brent discovered that this "Forbidden Zone" was once the great metropolis known as New York City. He now realized that he was actually back on his home planet – Earth.

Brent and Nova continued to explore the ruins until they encountered a tribe of subterranean mutants. These mutants – religious zealots that worshipped a Doomsday weapon called the Alpha-Omega Bomb, took the two humans prisoner, and brought them to the hollowed out chambers of St. Patrick's Cathedral.

The elders of this mutant society wielded tremendous telepathic abilities. They prided themselves on their ability to force their enemies to destroy each other. The leader of the mutants, Mendez XXVI, interrogated Brent at length and learned about an encroaching gorilla invasion of the Forbidden Zone. When Brent refused to cooperate, Mendez and the other mutants mind-controlled him into attacking Nova. Brent nearly killed Nova, and probably would have succeeded had the mutants not released their control over him.

After gathering the information they required, they separated the two, and placed Brent into a prison cell. In a moment of rare serendipity, Brent discovered that his new cell-mate was the very man he had been searching for all along – George Taylor.

A mutant jailer used his telepathic powers on the two men, forcing Taylor and Brent to fight one another. While the two struggled, another mutant guard escorted Nova across the corridor. Astonished to see her lover once again, Nova spoke for the first time in her life. She grunted the word "Taylor". This distracted the jailer enough that he briefly relinquished his hold on Brent and Taylor. Brent attacked him, shoving him against a wall of spiked metal bars.

At the same time that Brent was escaping from his jail cell, General Ursus and his gorilla army were marching into the mutant community. Taylor and Brent managed to arm themselves and make their way down to the cathedral hall. They found that Ursus' gorillas had taken command of the cathedral and killed many of the mutants. Brent fired a shot into Ursus' chest, killing him. The other gorillas returned fire, and Brent was struck down in hail of bullets.

Brent reappeared in the comic and novel adaptations of the second movie, and in the Planet of the Apes GameBoy the central character, an astronaut named "Ben" but based on Brent, has been sent to rescue Taylor.