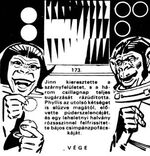 Jinn & Phyllis were a rich couple travelling in space, who found a mysterious manuscript encased in a glass bottle. The manuscript was the testimony of Ulysse Mérou, and formed the main story of La Planète des singes. Mérou recalled his travelling from Earth to the planet Soror, where he encountered a harsh ape culture who suppressed his primitive fellow-humans. After some time, Mérou was able to escape back to his own planet, only to find a similar fate awaiting him there. The final chapter of the book had Jinn & Phyllis refute the story as nonsense, the reason being that they themselves were, in fact, chimps, and Jinn, having been partly educated on Earth, knew such humans did not exist.

Retrieved from "https://planetoftheapes.fandom.com/wiki/Jinn_and_Phyllis?oldid=55935"
Community content is available under CC-BY-SA unless otherwise noted.