Planet of the Apes Wiki
Register
Don't have an account?
Sign In
Advertisement
in: Humans, Male Characters, Living Characters,
and 5 more

Battle of the Titans
Jeff Allen escapes ape capture with the help of Nova. He is soon reunited with Bill, and later Judy, and helps lead the rescue of the human population. By the last episode, the astronauts had gotten Urko removed from his position and were going to try to convince the Ape Council that humans were entitled to freedom and safety as much as apes were. 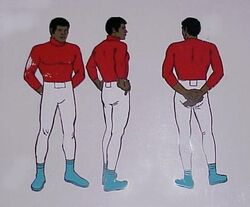