James Gregory was enthusiastic for the role: "Actually, I was anxious to do it, because I saw the first one and said, 'I could do that.' It's a good thing that I wasn't claustrophobic, though, because you felt hemmed in. I was strapped into my costume, it was like being a turtle with his shell and back on."[1] 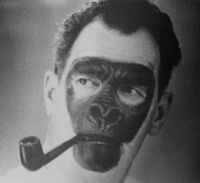 Retrieved from "https://planetoftheapes.fandom.com/wiki/James_Gregory?oldid=54777"
Community content is available under CC-BY-SA unless otherwise noted.