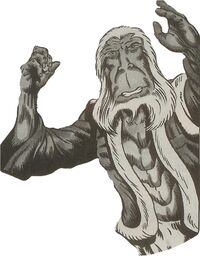 Jacob was an orangutan who lived in Ape City during the mid 21st century. He was the son of noted pedagogue Virgil and became a close confidante of Ape City's ruler, Alexander, but was reluctant to allow any rights to humans. Jacob accompanied Alexander on a special expedition into the Forbidden Zone. He saved Alexander's life when a throng of mutants leapt from the catacombs and attacked them.

Retrieved from "https://planetoftheapes.fandom.com/wiki/Jacob?oldid=60463"
Community content is available under CC-BY-SA unless otherwise noted.