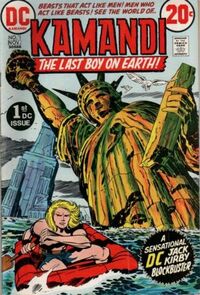 Jack 'The King' Kirby (August 28th, 1917 - February 6th, 1994) was one of the most highly-regarded comic creators of his time. Writing, drawing, and editing comic books, he was responsible for creating dozens of unique characters for both Marvel Comics and DC Comics.

Kirby paid homage to the climactic 'Statue of Liberty' scene from Planet of the Apes in the first issue of the successful DC Comics comic book series, Kamandi: The Last Boy on Earth, in 1972. The Kamandi series has been accused of plagiarising the Apes movie, because it featured a boy ("the last boy") in a post-apocalyptic world controlled by talking animals - tigers, dogs, gorillas, etc. Kirby denied this (he claimed in one interview that he hadn't seen the Apes movies, but in others he said he had, and was well aware of the film series when working on Kamandi), and in any case, the series developed its own unique story from that initial concept as it continued over 40 issues. Kirby had first used the name Kamandi in a caveman-type newspaper strip idea he pitched in 1956, entitled Kamandi of the Caves; and in September the following year, in Harvey Comics' Alarming Tales #1, he drew a science-fiction story entitled The Last Enemy, in which a man travels to the future and finds that humans are extinct and the world is ruled by tribes of intelligent tigers, dogs, and rats. It was a combination of these two stories that led to the Kamandi comic.

On the other hand, there was undoubtedly a strong Apes influence on the comic series that emerged. DC Comics publisher Carmine Infantino had failed to secure the comic-book license for the Apes movies, shortly beforehand. He had wanted Kirby to do their Apes series, and instead offered creative control of a new series to Kirby on the understanding that he develop a 'Planet of the Apes'-style concept (Infantino thus claimed to have created the premise for the series). Kirby revived his Kamandi concept from the fifties, and the final DC Comics version was a hybrid of Kirby's original character and Planet of the Apes. The Statue of Liberty cover was included at Infantino's insistence; Kirby later complained in interview that he didn't want to do it because it was so obviously copying Apes. 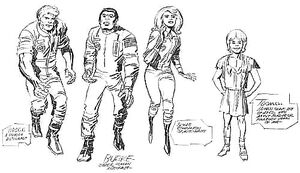 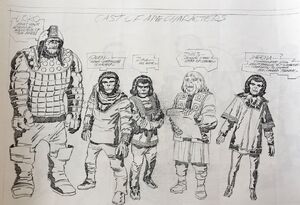 The comic book rights to Planet of the Apes had been acquired by Roy Thomas of Marvel Comics, DC's rival, by 1974, but Kirby had ended his first run at Marvel (1958-1970) when he joined DC, and by the time he returned to Marvel (1976-1978), the series was already winding down. A letter from a fan in an April 1976 issue of the UK Planet of the Apes comic asked if Jack Kirby could be asked to draw an 'Apes' story in the future, prompting the reply, "We'd dearly like to show our gratitude by telling you that Jack Kirby will immediately be switched to the drawing chores. But, with our forward planning already laid out, we have to break the news that the chances of Jack exercising his unique talents on an apes series are slim indeed." As Apes passed out of the mass consciousness to be replaced by newer sci-fi franchises, it seemed that Kirby would never work on an Apes project, but there was one more quirk of his career that would give a tantalising glimpse of what might have been. 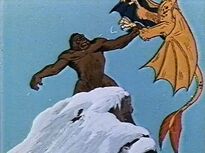 In the late 1970s, Kirby abandoned comics for animation studios, working with DePatie-Freleng on the animated Fantastic Four series in 1978 (along with co-creator Stan Lee and Marvel writer Roy Thomas). DePatie-Freleng had earlier produced the 1975 Return to the Planet of the Apes animated series, and were later bought out by Marvel in 1981. Jack Kirby also worked with Hanna-Barbera and Walt Disney around this time. In 1980, he began working with Ruby-Spears Productions, designing characters and backgrounds for Thundarr the Barbarian, Goldie Gold and Action Jack and Mr. T. Kirby and comic artist Doug Wildey were both then creative consultants on Chuck Norris: Karate Kommandos and The Centurions. During his time with Ruby-Spears, Kirby began drawing presentation boards for new animation projects. Among the presentations he proposed was a Planet of the Apes cartoon based on the 1974 TV series - Joe Ruby and Ken Spears had been employed as story editors on that series. Concept sketches by Kirby have been unearthed, one of which is of Virdon and Burke (both looking rather different), a female astronaut (“blonde companion of astronauts”) and Toonak, a “human slave boy.” A second sketch shows a giant hulking Urko, Zaius, Galen and his wife Zyra, and Jheena, a young female chimp companion to Toonak. A third, much more unusual sketch seems to show an enormous gorilla with hands aloft; in one hand a male human astronaut; in the other a human female in what appears to be a super-hero outfit. In the background a human or ape figure carries a banner while riding a dragon-like flying reptile over a mountain. The images of the giant gorilla among mountains and, particularly, of the flying reptile are more reminiscent of 'Kygoor' and the 'Monster Bird' from Return to the Planet of the Apes - Doug Wildey had been supervising director and associate producer for that series. Ruby-Spears' Apes series was never developed, but in 2010 Ruby-Spears and Sid & Marty Krofft announced plans to revive some of the original characters Kirby had also designed during that time, in as many forms as possible.[1][2][3]