Planet of the Apes Wiki
Register
Don't have an account?
Sign In
Advertisement
in: Marvel Characters, Mutants, Living Characters,
and 2 more 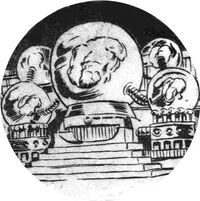 The Inheritors (self-styled) were a society originating from human experiments. They were led by the cybernetic entity known as the Supreme Gestalt Commander (or Gestalt Mind), a network of five giant brains suspended in glass chambers, named Be-One, Be-Two, Be-Three, Be-Four and Be-Five. Each telepathically controlled a division of Mutant Drones, who quickly died if their controlling mind was killed. The drones, in turn, oversaw a slave race of primitive ape-human hybrids. During a battle in the Inheritor's cave home, Jason and Alex and their allies destroyed two of the giant brains by shattering their glass casings (Be-Two and either Be-Four or Be-Five), and these were later replaced by the "newly-thawed" Be-Six and Be-Seven.[1]

Mungwortt also encountered the Inheritors, but by his time they had been conquered and enslaved by the mutants of the Fellowship. They were re-branded as the 'Overseers', controlling the functioning of their city and further increasing their psychic capabilities. Be-Six, who was twice as large as the others, remained imprisoned in the laboratory of their former enemies the Makers, but Be-One, Be-Three and (the previously unknown) Be-Eight had escaped with the help of their slaves and were plotting their revenge at the former Central Park Zoo. In the dying moments of the Earth the Inheritors met their end at the behest of Mungwortt.