ANSA - the American National Space Administration - launched a space vessel from Cape Kennedy on January 14 1972,[1] Its crew consisted of George Taylor, John Landon, Thomas Dodge and Maryann Stewart. The craft was known as Liberty 1, and nicknamed the Icarus. Their mission was to journey to another star. After six months on the craft the crew placed themselves into a state of suspended animation using a special drug to keep them sedated, and confined themselves to stasis pods. It seems they planned to spend twelve months in suspended animation, a total of eighteen months on the ship. While they slept, the vessel was propelled two-thousand years into the future, confirming Dr. Hasslein's theory of time in a vehicle travelling near the speed of light. At some point in the journey, Lieutenant Stewart's stasis pod malfunctioned and an air leak caused her to die shortly after entering it.

Five Liberty ships were reverse engineered from technology of classified origin, and were propelled by an experimental photon propulsion drive designed by Dr. Hasslein, following on from the prototype used for the Juno mission to Jupiter. The crew were to "pollinate" the stars if something went wrong and they found themselves stranded. Three months after the crew entered hibernation, the Liberty 1 collided with a ship exactly identical with itself, automatically setting an emergency course for Earth and crash-landing there nine months later (by ship time). Back at ANSA, the X-Comm technology allowed Dr. Hasslein to monitor progress, but communications abruptly stopped en route to Centaurus.

The ship splashed down into a stagnant salt lake about eleven months into the crew's stasis. Upon awakening, the remaining crew found the dessicated remains of Stewart's body in her pod. They were forced to evacuate the ship as it quickly began to sink to the bottom of the lake.

Upon landing, Landon's location transmission signal from the TX-9 somehow found its way back through the time distortion to the place they had left, prompting ANSA to consider sending the Liberty 2 along the same trajectory, either as a rescue mission or, more likely, as a suicide mission which would nevertheless prove time-travel theory. Shortly afterwards, ape scientist Dr. Milo spoke with Landon and was told about the lost space ship. He organised a team of fifteen chimps to undertake an unapproved expedition to locate the craft.

Some time later, Dr. Milo recovered the wreckage of the ship and restored it to working order using parts salvaged from the Libert 2, taking off moments before the Earth's destruction. Milo and his colleagues, Dr. Zira and Dr. Cornelius, witnessed "the rim of the Earth melting" and were thrown through a Hasslein Curve to 1973 - a point little over a year after Taylor left. The ship was recovered from the sea at El Palomar, California, and taken away for examination by NASA, where it was found to be Taylor's missing ship. 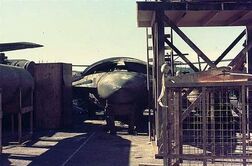 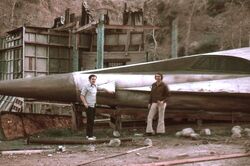