Planet of the Apes Wiki
Register
Don't have an account?
Sign In
Advertisement
in: APJ Characters, Male Characters, Hybrids,
and 2 more

Planet of the Apes Revisited script

The Hum-Ape Child is a character that appeared in screen tests and early scripts for Beneath the Planet of the Apes.

The unused and unnamed character was revived and included as Messias, a 'heterogen', in the 2018 novel Death of the Planet of the Apes.

The first screenplay for the proposed sequel to Planet of the Apes submitted by Paul Dehn (after rejected script treatments from both Pierre Boulle and Rod Serling) in December 1968 largely contained the story that would become Beneath the Planet of the Apes, but one notable difference was the ending. At the point where, in the final script, the gorilla army invades the mutant city and everyone, including the astronauts, dies in a bloodbath, this script had Taylor, Brent and Nova escape. While the bomb is set off, it destroys only the mutant city and the gorilla army therein. Taylor, Brent and Nova lead the rest of the primitive humans to the Ape City, where Zira and Cornelius free the captive humans held in their cages.

The final scene is set in the far future, where a group of children are being tought about that final war, how the armies were all killed and how Taylor brought peace and harmony to all the survivors in the 47 years before his death. The teacher is a chimpanzee and the children are human. One very inquisitive boy is called 'Taylor', after their society's founder. The scripts do not mention a hybrid child specifically, but it seems fair to assume that this is where the proposed character would have appeared: either the child called Taylor, or some or all of the children are hybrids - the final evidence of the harmony that has been established. 'Planet of the Apes Revisited' by Joe Russo and Larry Landsman would seem to confirm this assumption: "There is an optimistic ending in which all captive humans are freed with a new era dawning between man and ape, and, eventually, the birth of a half-human, half-ape child."[1] (The script goes on to cut to the Forbidden Zone where a group of horribly mutated apes emerge from a tunnel and, symbolically, shoot a dove - an ominous ending after all!)

Costume tests were undertaken in late 1968, and further make-up tests in early 1969, but by the time filming began Charlton Heston's proposal (backed by Dick Zanuck, who was being fired by Twentieth Century Fox) that not just his character but the entire planet be killed off, meant that the planned ending of the film had to be cut. Asked about the hybrid child, director Ted Post added, "The special effects department, along with the makeup team, created something although, to be fair, nobody really like the idea."[2] It has also been pointed out (on Behind the Planet of the Apes) that the implied inter-species breeding would cause problems with the film's MPAA rating; as Paul Dehn himself pointed out: "I wanted a more optimistic end to 'Apes 2' than the destruction of Earth by the Doomsday Bomb, but my own end, the birth of a child half-human and half-monkey, proved intractable in terms of make-up, and anyway it was thought that Man-Ape miscegenation might lose us our G certificate!"[3]

Only some archive photographs and a short test film remain of this character. The names 'Hum-Ape' and Tom Doran are taken from a production slate. To add to the mystery, this film was taken on the set of the mutant city, with a costume similar to that of the mutants, but this is likely just a costume for the future society, shot on the most convenient set. The scene of the teacher and children was resurrected for the opening and closing scenes of Battle for the Planet of the Apes. 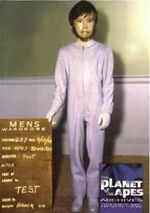 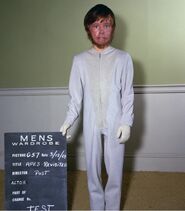 Inspired, perhaps, by the child's futuristic clothing and subterranean photo-shoot, author Drew Gaska constructed the character of Messias for his 2018 novel, set contemporaneously with Beneath the Planet of the Apes. Here, the ‘heterogen’ child is a genetically engineered experiment in psychic control, designed by Be-Six in the laboratories of the Makers so that the Fellowship could extend their powers to apes and primitive humans. Taylor found Messias living in a city which was later revealed to have been created and populated entirely by Messias' imagination.