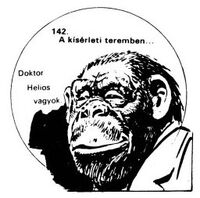 Hélius performed experimental operations on the brains of human captives. A friend of Cornélius, he agreed to demonstrate some of his findings to the human astronaut Ulysse Mérou.

The chimpanzee proudly demonstrated various experiments conducted in his department. While he assured the Earthman that the human subjects felt no pain in these experiments it did little to lighten the gruesome horrors in the laboratory: Men stripped of their basic senses and artificially crippled, women rendered unable to recognize their own children, children subjected to various electrical stimuli.

The young ape was oblivious to Ulysse's disgust and horror at the callous treatment of the men and women in which these experiments were conducted upon. Ulysse's temper finally reached its limit when he witnessed a lovely young girl, that reminded him of his wife, Nova, being subjected in a cruel experiment to test the limits of electrical stimulation. When the apes fixed several electrodes, the girl was subjected to a continuous electrical current which caused the entire left side of her body to convulse violently. Unable to take much more, Ulysse demanded they stop, however Cornelius assured him stating such experiments were necessary and escorted the human to the next room.

In one experiment he displayed that a man was able to talk like a gramophone, repeating words and conversations he had heard in captivity. However his second subject, a woman, revealed some of his most profound discoveries in awakening the memory of the species.

These remarkable experiments revealed memories inherited by the human subjects from their distant ancestors, and proved that the humans of the planet Soror had not only been intelligent, but had once been the dominant species of the planet.

Shortly after the presentation, the chimpanzee had leaked out his findings to the public causing a media panic that the Institute had finally made man able to talk. Hélius's revelation as man being the former masters of Soror may have accelerated the Grand Council of Soror in singling out Ulysse and his family as threats.

Retrieved from "https://planetoftheapes.fandom.com/wiki/Hélius?oldid=60537"
Community content is available under CC-BY-SA unless otherwise noted.