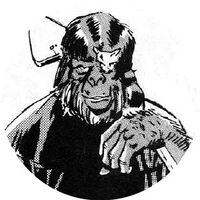 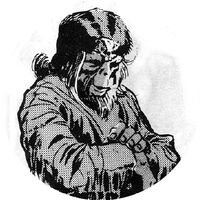 Gunpowder Julius lived in a river settlement where apes and humans were equals, and his best friend was Steely Dan. He became friends with the travellers and helped defend the settlement when Brutus attacked. He later came to the rescue of their city when it was also attacked by Brutus. In his own words: "I'm Gunpowder Julius - the meanest, maddest, ornierest, toughest, fightin'est, twice-cussed-on-sunday, bar-grinnin', polecat axin', barehanded tree-choppin', racoon-wrasslin', son-of-a-mountain-ape riverboat runner you've ever seen..." His keelboat was named the 'Simian'.

Retrieved from "https://planetoftheapes.fandom.com/wiki/Gunpowder_Julius?oldid=58192"
Community content is available under CC-BY-SA unless otherwise noted.