Planet of the Apes Wiki
Register
Don't have an account?
Sign In
Advertisement
in: CE, CE Characters, Ape Rebellion (CE),
and 16 more

"You didn't tell Caesar about the guns we found?
Neither will you.
"
―Grey and Koba

Grey was an evolved chimpanzee and a former follower of Koba who assisted in the bonobo's plans to bring about a war against the humans. He was freed by Caesar during the Ape Rebellion and survived the battle at the Golden Gate Bridge before joining his people in Muir Woods Park. He was a former member of the Ape Council and a soldier of the Ape Army, but lost his position on the council for collaborating with Koba.

Ten years ago, during the infamous Ape Rebellion, Grey was liberated from the San Francisco Zoo and joined his fellow apes in escaping from the city and making it to freedom in the Muir Woods Park. At some unknown point, he met and befriended another chimpanzee named Stone and the two would later befriend the bonobo Koba, becoming his faithful followers always accompanying him and listening to every order he gave.

Grey is first seen in the forest with the other apes when they discover that a group of humans shot one of them in the woods. After the humans were scared off by the apes, Caesar assigns him, Stone and Koba to follow them back to their destination to see how many humans remain. He is seen again when Caesar leads the Ape Army to the human colony to personally issue a warning to not enter Ape territory or else there will be a war. Later on, Grey watched as Caesar allowed Malcolm and his group to work on the dam to repower the city. He would then accompany Stone and Koba back to the city to spy on the humans due to Koba mistrust of humanity and the trio would find a secret armory of guns powerful enough to wipe out all the apes in the village. Hurrying back to the ape village, the trio spot Blue Eyes whom they interrogate over the location of his father and are told he is at the dam with the humans. Grey accompanies Koba to the dam and watches as he confronts Caesar over his aiding the humans who have just threatened the lives of his sons and are a threat to their people. When Koba accuses Caesar of loving humans more than apes and even his own sons, Caesar angrily lashes out at Koba for his insolence. Grey and Stone do nothing but watch as Caesar brutally beats their leader to the near brink of death before stopping. This beating would ultimately lead to Koba secretly plan to overthrow Caesar as Alpha. Later when eating in peace and quiet, Grey asks the sulking Koba if they should tell Caesar about the armory, but Koba tells Grey to keep it to himself.

That night, Koba, having gotten a gun, finds and kills an isolated Carver, stealing his hat and lighter. While Koba supposedly assassinated Caesar, Grey along with Stone burned down the Ape Village. The destruction of their homes and "death" of their leader put the apes in a panic until Koba took power for himself and ordered them to calm down and take up arms against the humans. Grey then joined his people in the attack against the humans where they killed many humans and destroyed half of the city.

By the next morning, the apes have taken control of the city with many of the humans ending up dead or captured as Koba wanted them to see what life was like in a cage. Grey became Koba's right-hand ape being seen next to him during the occupation of the city which he seems content with as they have defeated the humans and seized their territory.

Later on, Grey was with Koba at the balcony of the Human Shelter where they see a startling sight Caesar alive and well. Stunned at this, Grey moved aside as Caesar made his way to confront Koba over his actions and would bear witness over the pair's battle for supremacy occurred. An explosion caused by Dreyfus happened and destroyed half of the tower which had many of his people caught in the crossfire. Grey got pinned under debris. He saw Koba approach him and lift the debris, but only to grab the gun and drop the debris back on Grey. Grey then saw Caesar drop the dreadful bonobo to his death.

Later, Grey was freed from the debris and realigned loyalty to Caesar. He is seen along with other apes holding Malcolm at gunpoint when he comes out the building to speak with Caesar, who yells at them to leave the human alone. Afterwards he is seen bowing down to Caesar with the other apes awaiting the battle with the humans to come.

Although Grey returned to Caesar's army, Caesar did not fully trust him anymore. Grey picked up on this, as did Red, a gorilla that still believed in Koba's leadership. Red convinced Grey to leave Caesar's army to create a troop of their own, made up of Koba's followers, with Grey as their new alpha in Koba's place. Grey's position proved to be short lived, however. When he stood against Red's bid to kill Cornelia shortly after they left Caesar's allegiance, Red turned on him and shot him in the face at close range, killing him. Grey's death was very similar to that of Ash. Both had stood against a rogue ape for what they believed was right, and both had been killed for it. Before Grey's death, Red had insisted that the chimpanzee was their leader, though the gorilla had seemed to merely use him as a pawn to put his own plans into action and the moment that Grey did not go along with his ideas, he turned against him.

From what has been seen from his actions, it is shown that Grey is a firm follower in Koba and it has been seen that both possess a penchant love for violence and live only for the amount of destruction. Moreover, he is seen by Koba's side supporting his actions and soon becomes his right hand ape during the besieging and occupation of San Francisco.

Later on, when Grey was left trapped, he saw the true colors of his self-appointed leader who abandoned him to his fate. This betrayal most likely shocked him and made him realize that he swore allegiance to a violent psychopath and caused him to feel foolish for his blind loyalty. He was then freed from being trapped and became loyal to Caesar, showing him the same loyalty as he did Koba.

Grey was shown to be unhappy that Caesar no longer trusted him to the same extent as he had before, but needed convincing to turn away from Caesar even so. Grey's morals won out in the end, however, as he refused to take part in killing Cornelia during the birth of Rain's infants, as it went against their custom during this sacred time. This proved that Grey was not all bad and did still believe in some of Caesar's ways. He was willing to fight for what he believed to be right, against a close comrade, showing that he did not always blindly follow without thought. At the time of his death, Grey showed tremendous courage before his death, challenging Red to a brawl and having no fear at his superior size.

Grey with Stone and Maurice during the first sighting of humans in a decade.

Grey as Koba yelled at the humans.

Grey with Stone and Koba discover the Human Colony.

In San Francisco spying on the Humans.

Grey, a member of Caesar's Ape Council, (on Stone's right side). 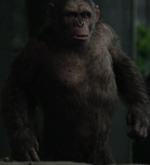 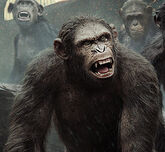