Planet of the Apes Wiki
Register
Don't have an account?
Sign In
Advertisement
in: APJ Characters, Gorillas, Living Characters,
and 4 more

Escape from the Planet of the Apes
The Gorilla in the Zoo was being cared for in the Los Angeles Zoo infirmary due to his depression in 1973. Agitated by the arguments of the newly-arrived Apes in the adjoining cage, Milo, Zira and Cornelius, the gorilla grabbed Milo by the throat and killed him. He was sedated and chained afterwards. 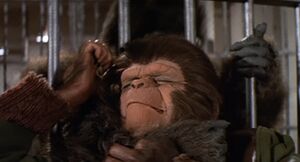