When Taylor makes his first escape attempt, he runs wildly through Ape City. At one point he runs into a building where a funeral is being held for a gorilla warrior. Whilst almost escaping unseen, a gorilla child leaves (to go to the toilet, according to the Marvel Comics adaptation) and spots Taylor. As he brings it to the attention of the crowd, Taylor runs off again. The gorilla child was presumably killed when the Alpha-Omega Bomb was detonated by Taylor (if not beforehand). 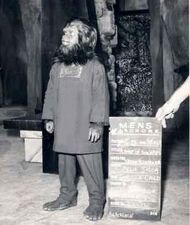 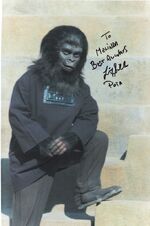 Retrieved from "https://planetoftheapes.fandom.com/wiki/Gorilla_Child?oldid=57104"
Community content is available under CC-BY-SA unless otherwise noted.