25-year-old Gôdo is the only human to have survived in the world of the apes. He knows nothing of his origins or what happened to other humans. He lives on 'Green Mountain', where he has built booby-traps to keep out the hostile ape population, and is a master of martial arts and knife throwing. On occasion he has come to the aid of apes: he rescues Pepe's mother and fails to save Gebâ's wife and child. Gebâ blames him for these deaths, not realizing the true events, and ruthlessly pursues him in order to execute him. Once captured, he is saved only through the intervention of Cabinet Minister Bippu.

Gôdo is rescued by Pepe and together the five fugitives evade the ape security apparatus, finally arriving back at Green Mountain, where the mysterious UFO reveals it's purpose to them. Returning the other humans to their own time, Gôdo is instead sent to another time and possibly another planet and finds himself alone in a desert. 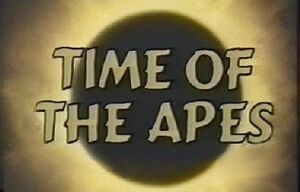 Retrieved from "https://planetoftheapes.fandom.com/wiki/G%C3%B4do/Godo?oldid=38050"
Community content is available under CC-BY-SA unless otherwise noted.