Future History Chronicles was a series of wildly-imaginative original stories written by Doug Moench for inclusion in Marvel Comics' Planet of the Apes Magazine. The writing was matched by the fantastically-detailed art of Tom Sutton, as Moench later remembered: "He worked on these gigantic pages whereas most other artists were working on pages 1 1/2 up [the art pages were half again bigger than they were reproduced], he was working twice up. My desk wasn’t big enough to hold his pages. You could get more copy on the pages and get some denser stories out of it. He could get more detail in. He really got into 'Planet of the Apes'. I happen to think that it sort of jazzed him up for a sort of renaissance in his career. It seemed like a quantum leap at the time."[1] Uniquely, Moench set these Apes Chronicles in a mainly maritime environment, though apes apparently dislike being around large bodies of water and are poor swimmers. A sixth Chronicle was outlined by Moench, addressed to artist Tom Sutton and editor John David Warner (advising that it would fit into 18 pages, but that 20 would be better!). Details of this unused story were first revealed in Timeline of the Planet of the Apes: The Definitive Chronology by Rich Handley, and the outline is now available online. 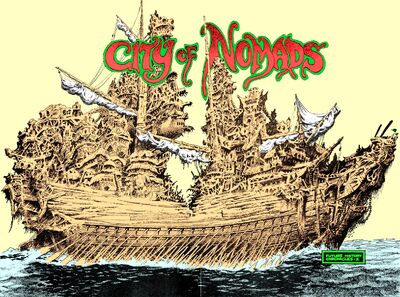 A maritine civilization developed, with great city-ships carrying apes and humans across the oceans. Civil war erupted aboard one particular city-ship, the Hydromeda, when its gorilla crew mutinied against the oppressive ruling orangutans. To keep the peace, a policy of peaceful co-existence was decreed, splitting the city in half, giving the gorillas their own territory, 'Old Hydromeda'. Humans soon took the gorillas' place as the lowest of the social order. An uneasy peace lasted for years until an orangutan was found dead and the orangutans thought it was the work of the rebels. Outraged, both sides went to war, unaware a third party was at work. The rebels pushed the orangutans' chimp soldiers back and set fire to 'New Hydromeda', while an assassin slinked into gorilla territory and ignited it as well. The assassin was actually the human Alaric, who freed Starkor, Reena and other human slaves from the ship's bowels. The humans fought their way to lifeboats, taking to the sea as the city-ship died in flames. Many perished during the long voyage to find land.

Alaric's people found a band of stranded apes and forged an alliance built on mutual need - the apes would help build them the 'Freedom Reaver', a sailing ship smaller than 'Hydromeda' but with a massive battering ram at its fore, and the humans would give them passage home before attacking other city-ships. Construction lasted two years under the guidance of Chief Architect Graymalkyn, a gorilla, who put aside his hatred of humans for the sake of the project. Starkor distrusted apes, as did most humans in the crew, but Alaric knew their future depended on the apes' knowledge. Once at sea, a creature swallowed Alaric, Graymalkyn and Starkor, taking them to an undersea palace called 'Dwelleron'. Ruled by a benevolent orangutan, Ambrosia, it rested inside a biomechanically-bred mutation that organically sustained itself and its occupants. Ambrosia built Dwelleron intending to destroy all the city-ships. Touched by Alaric's nobility, he ended his war and self-destructed his biomechanical host, unable to change his worldview. Much time passed, and most of the Reaver's apes returned to their homelands. Those who remained did so out of loyalty to Graymalkyn, whose own views had changed: he was now devoted to ending human slavery. The crew learned of the 'Federation', a fabled alliance of enlightened city-ships permanently merged and engaging in peaceful commerce.

Later, the Reaver discovers the 'Cathedraulus', a vessel with a ghostly glow. Alaric, Graymalkyn and Starkor learned that the crew were the 'New Order Born Of Old Sins' - mutated descendants of apes and humans altered in the Great War. At the center of a garden, the mutants had erected a nuclear missile, the center of their worship. The mutants planned to spread their 'New Order' to the mainland. Alaric had to kill all the mutants before their evil spread. The floor suddenly opened, and a great balloon called the 'Cloud Swarm' ascended toward the sky. Climbing into the balloon's gondola, they slaughtered all but two of the fleeing mutants. Rising above the clouds, the balloon entered the 'Death Mists', a strange black miasma rocked by thunder and lightning. Three giant flying machines approached, ten times' the balloon's size, igniting it in flames. As the balloon exploded, their plummeting gondola hit the ground, where a group of ape mutants riding giant frogs - 'Her Majesty's Cannibal Corps' - mistook them for their sworn enemies, the 'Industrialists'. They stood and fought, then continued on their quest. They found a city on land, around which several airships were docked. Alaric decided to approach in friendship, to apologize for the earlier misunderstanding and to ask if they could settle down and live in peace.

Sexxtann was the six-sided sexagon fortress of the Industrialists (a deliberate potshot at Exxon) and contained a vast jungle at it's center. The Industrialists permitted them to enter and as they removed their outfits they were revealed to all be black humans. The group had never seen black humans before, and Alaric recalled the Cannibal Chief's reference to "humans like you" - meaning white humans. Accessible only through the roof, the huge city structure was served by a canal surrounded by densely-packed buildings. At lower levels, the canal was contained by glass walls, creating an enormous aquarium. The four were taken before the Council to decide their fate and, judging that apes and white humans were responsible for destroying the world just as African nations were ready to earn some status, they were sentenced to "controlled containment by the canals of Sexxtann" - thrown into the central jungle. After an attack by one of the giant amphibians that lived there, they made camp for the night, but Graymalkin was snatched by a giant ape hand, unbeknownst to the others. The 40-feet tall, simple-minded female ape vaguely recalled her name as "Her Midgitsy"; she could remember that her people fought the Industrialists because of their destruction of the trees and plants. Graymalkin guessed that she was experimented upon and mutated by the Industrialists - increasing her size while diminishing her mental capacities. When the others woke they noticed Graymalkin missing and went in search. Finding him in the company of a giant ape, they assumed the worst and attacked her with crossbows. She ran far into the jungle, seriously wounded. Roused by the noise, the Industrialists' airships investigated, and used their flame-throwers to start a jungle fire. As our heroes got cornered by the spreading flames, Her Midgitsy reappeared and lifted them all as high as she could, from where Alaric used a grappling hook to reach the top of the wall. Having guided them to safety, Her Midgitsy turned to face the still-firing airships. One blast hit the base of the Sexxtann wall. She picked up a felled tree and flailed uselessly at them, but hit the same weakened point in the wall. The glass wall at the bottom of the canal shattered and water flooded out into the jungle. Her Midgitsy was knocked over and finally drowned. The jungle became a lake, the lowest levels of Sexxtann flooded, but the damage would not be permanent. The four escaped in an unattended airship and Graymalkin wept for the unfortunate giant as her hand disappeared beneath the water. They then realized the significance of her name - she was the queen of the 'Cannibal Corps'. The ultimate fate of Alaric and his friends is unrecorded.[2]

Retrieved from "https://planetoftheapes.fandom.com/wiki/Future_History_Chronicles?oldid=61169"
Community content is available under CC-BY-SA unless otherwise noted.