Planet of the Apes Wiki
Register
Don't have an account?
Sign In
Advertisement
in: APJ Characters, Gorillas, Living Characters,
and 6 more

Conquest of the Planet of the Apes
Frank was a gorilla who lived during the latter half of the 20th century. In 1991, he was working as a food server in a restaurant in 'Modern City', made to serve tea and light cigarettes for society ladies. Frank was present when circus owner, Armando, first brought Caesar to the large city. At first, Frank and Caesar did not care for one another, and the two nearly had an altercation while Frank was waiting tables including lighting up a woman's cigarette. Later however, Frank became one of Caesar's followers and actively participated in the ape rebellion against their human masters. 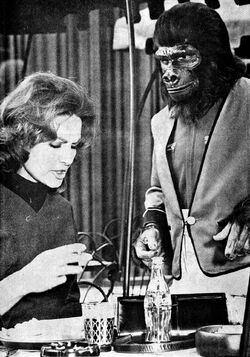