Planet of the Apes Wiki
Register
Don't have an account?
Sign In
Advertisement
in: Article stubs, Characters, CE Characters,
and 11 more

"You know the scary thing about them? They don't need power. Lights. Heat. Nothing. That's their advantage. That's what makes them strong."
―Foster to Malcolm's Group about the Apes

Foster was a member of a struggling community of human survivors who met Caesar and his colony under difficult circumstances. He was also a member of Malcolm's Group.

Foster was a survivor of the Simian Flu Pandemic. At some point after this, he would join Malcolm's Group of survivors through unknown circumstances, along with Ellie, Alexander, Carver and Kemp. One day, they had been out searching in the woods for the dam, which they required in order to restore power to the human colony. However, when Carver accidentally disturbed two apes and, due to his phobia of apes getting the best of him, shooting and injuring one of them, the rest of the group including Foster ran over to him. They pulled out their rifles just in case, and scolded Carver for shooting the ape. Soon, the ape's leader, Caesar, and his ape colony arrived, and surrounded the group. When Malcolm ordered the group to lower their guns, Foster asked if he was crazy, but obeyed nonetheless. He and the others were shocked when Caesar yelled in English, and subsequently fled on Caesar's orders.

Working on the Dam

Foster returned to the forest with Ellie, Malcolm, Alexander, Carver and a few others to convince Caesar to allow them to generate electricity from the dam. Once Caesar allowed the humans to stay (after forcing them to give up their guns) he and the others discussed the apes. He then scolded and threatened Carver for coldly bringing up the deaths of Malcolm's first wife and Ellie's little daughter. Foster stayed with the group, and was present where he was shown smiling as Caesar's infant son interacted with Ellie and Alexander.

When Carver threatened both of Caesar's sons, the apes demanded that the group leave their territory but this decision was overturned by Malcolm and Ellie who help tend to the illness of Caesar's wife. The apes even promised to help the humans out but on the condition that Carver leaves, which Foster happily decided to do himself. He forcibly sent Carver back to the car, and when they arrived said to him "See you tomorrow Asshole".

Fleeing from the Apes

Foster and the others, with the help of the apes, then proceeded to work on the dam. He payed witness to Caesar horribly beating up Koba for his insolence. Foster and the others later watched the power in the Human Colony being restored. When Koba shot Caesar and framed Carver (thereby framing the humans), Foster fled with the others. His fate was unknown but he was presumably killed as he and Kemp fled in the direction the apes went in for the city. By morning, only Ellie, Malcolm, and Alexander hid and were they only ones who seemed to have survived among the group. His car was still in the woods after his escape, leading to the possibility he was either killed or escaped into the deeper parts of the forest.

Foster was both amazed and terrified of the apes, as he knew what they are capable of; however, unlike Carver, he (correctly) never blamed or hated the apes for wiping out most of the human race, as Foster knew full well that the Simian Flu was created by the humans.

Carver was a former member of Malcolm's Group. Foster did not have much interaction with Carver, however, it became obvious that Foster did not get along with Carver at all. When Carver used the deaths of Malcolm's first wife and Ellie's young daughter as reasons to hate the apes for causing the Simian Flu outbreak, he became so disgusted that he threatened to beat up Carver, if the latter did not stop his nonsense.

At the dam, he was enraged/horrified when Carver threatened Caesar's two sons which ruined the peaceful moment between the apes and humans and also caused Caesar to become angry and nearly exile the humans. Foster on Malcolm's orders, forcibly drag and lock Carver in one of the cars they arrived in, while saying "See you tomorrow Asshole". Unknown to Foster, this would be the last time he would see him alive, as Carver was later killed by Koba. 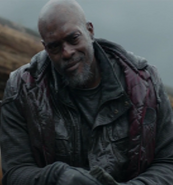