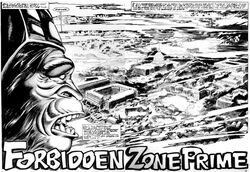 Forbidden Zone Prime was an original story for Marvel Comics' Planet of the Apes Magazine written by Doug Moench. It was drawn by an unknown artist but remained unpublished, possibly because of the magazine's cancellation. Pages from the story only became known to the public about thirty years later, with ten non-consecutive pages so far discovered from different sources.

Gorilla loner Zandor stumbles across the ruins of a vast human city (Washington, D.C.) now known as Forbidden Zone Prime.[1] He races back to his home town to reveal his news. In the ape town, idealistic dreamer chimp Julius embaresses his more practical architect wife, Viraga. As human girl Steena carries firewood from the nearby forest, she startles the horse of the returning Zandor, who threatens to beat her. Julius intervenes, to his wife's disgust, and Steena and Julius share a rare moment of cross-species empathy. The story seems to come to a natural, if depressing, conclusion at this point, although the significance of the titular city is not explained, and may have been the subject of further pages.