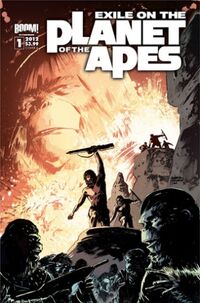 "18 years before a man named Taylor fell from the stars... Ape society is evolving, yet not all primates are considered equal. Humans alone lack the power of speech. Two years ago, Dr. Zaius banished all humans from Ape City, launching a campaign of eradication. But one among them was taught to communicate with his hands. Now the human rebellion has begun. They don't need to speak to find their voice..."

"With ape society gripped in uncertainty, Doctor Zaius must find a way to unite the warring factions before they rip the city apart. It’s up to one lowly chimp to seek out the famed, disgraced General Aleron deep in the heart of the Forbidden Zone, with a secret that might help — or destroy!"[1]

Retrieved from "https://planetoftheapes.fandom.com/wiki/Exile_on_the_Planet_of_the_Apes?oldid=61145"
Community content is available under CC-BY-SA unless otherwise noted.