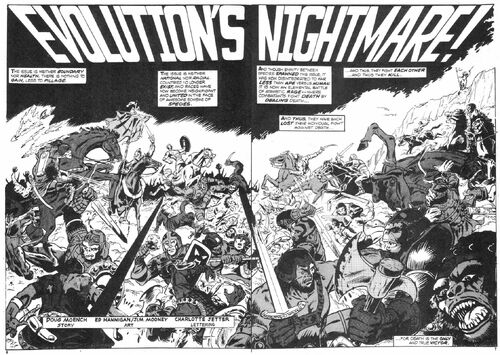 Evolution's Nightmare was a lengthy scene from the earlier days of man/ape war, written by Doug Moench and drawn by Ed Hannigan (with inking by Jim Mooney) for Marvel Comics' Planet of the Apes Magazine.[1] Moench recalled how Hannigan got the opertunity to draw an Apes story early into the magazine's run: "Ed Hannigan became a buddy of mine. I think he was in the Bullpen doing corrections and stuff. He wanted to do his own story. Back then it was easy. You just had to convince Roy [Thomas] or someone to give you a chance... I can’t remember if Mike Ploog was running late or they just decided to give him some extra time, but Ed wanted to prove he could do a story. That’s pretty much how 'Evolution’s Nightmare' came about."[2]

In a terrible battle thirty or forty miles north of San Francisco, gorilla and human armies slaughtered one another until only one human and one ape were alive. But the survivors, Solomon the gorilla and Jovan the human, were seriously wounded: the human could not move his legs, the ape could not use his arms. In order to survive, they formed an uneasy but necessary truce and had to both work together. The human could be carried on the shoulders of the ape, providing food for both with his bow and arrow. Yet their hate of each other was so great that they only wanted to collaborate temporarily – after their recovery they wanted the battle to the death to continue.

The bizarre duo crossed the desert, battling mutated beasts, harsh weather and other obstacles. Caught in a lightning storm, they sought shelter in a cave, where an ape-human hybrid named Mordecai provided shelter, food and healing salves. They resumed fighting once they were able, but Mordecai urged them to solve their differences without bloodshed, binding their hands so their actions could dictate who was superior. When still they fought, he sadly cast them out, bidding them to visit the Forbidden Zone and see what their hatred had wrought. The devestation on both sides showed what his words could not. Stunned, they put aside their hatred, clasped hands and vowed to end the war together. Their epiphany was short-lived, though, as they were caught between bands of Mutant Men and Mutant Apes squaring off to protect their ridges of rubble. The crossfire killed them both, their corpses a testament to Mordecai's wisdom. [3]

Retrieved from "https://planetoftheapes.fandom.com/wiki/Evolution%27s_Nightmare?oldid=21086"
Community content is available under CC-BY-SA unless otherwise noted.