Escape from the Planet of the Apes (Soundtrack Album)

Escape from the
Planet of the Apes:
Original Motion Picture Soundtrack

Returning to the Planet of the Apes franchise for 1971's Escape from the Planet of the Apes, soundtrack composer Jerry Goldsmith took the opportunity to write something completely different from his ground-breaking score for the original classic. Just as he had used avant garde compositions and unusual musical instruments to accompany the supposedly alien world of that first film, his score for the third installment mirrored its setting in contemporary (1973) Los Angeles. Adding electric guitar, steel drum and electric sitar to his orchestra, Goldsmith produced a rock-influenced theme and a soundtrack which conjures images the 1970s more than any of the other Apes scores. With declining investment in each successive sequel, however, the Escape soundtrack was the first not to be issued on record. Nevertheless, the music proved very popular among soundtrack music fans and over the course of more than 25 years the demands for an official soundtrack release persisted.

In August 1997, Varese Sarabande completely overhauled previous releases of Jerry Goldsmith's score for the first Apes movie by expanding most of the tracks to their full length as well as adding five previously unreleased pieces. Included as a bonus was a sixteen-and-a-half minute medley 'Suite' of Goldsmith's music from the then still-unreleased score to Escape from the Planet of the Apes (Cat# VSD-5848). The same disc was re-issued by the Colosseum VSD label in Germany in 1997 (Cat# CVS 5848), by Volcano Records in Japan in 1997 (Cat# CPC8-1006) and by the Geneon label in Japan in 2007 (Cat# GNCE-4020). 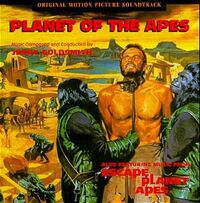 More of the popular soundtrack music also turned up on bootleg CD releases, notably on Pony Express (Cat# PECD 4001), which combined almost 26 minutes of music from Escape with pieces from Goldsmith's The Mephisto Waltz on one disc in 1998, and Soundtrack Library (Cat# CD 026), which combined over 32 minutes from Escape with music from Goldsmith's Damnation Alley, although it repeated some of the tracks. In October 2009 Varese Sarabande finally released the full 28-minute musical score on a separate CD.