After escaping an attack on the humanoid's caves by General Urko's gorilla army, Jeff is able to hide with Nova and evade capture. Bill is caught and herded into cages with the other captured humans for transport to Ape City. Realising that Bill can speak, one of the humans motions for him to keep silent as Urko's Jeep comes to a halt near the cages. Bill's shock gives way to terror as he hears Urko comment to his aides that the group of humans will be used for the army's war games. Back in the city, Dr. Zaius promises Cornelius and Zira that they will be allowed to select six specimens for their study from the group of humans Urko is bringing back from the hunt, despite the general's protesting. Outside, the army returns to the cheers of all of Ape City. Meanwhile, Jeff persuades Nova to show him where Bill was taken. After seeing the catch of humans, Zira and Cornelius make their choice of specimens for laboratory study. Bill, whom Zira christens "Blue Eyes", is among the humans selected. He overhears Zaius tell Urko that if ever humans obtain the power of speech, they must die as a race, so he remains silent for the time being. Zaius plans to send some of the humans to pet stores, some will become labourers, others will go to zoos. Urko, feeling that all humans are worthless, protests and reminds Zaius that someday, when the gorillas are in charge, things will be very different. 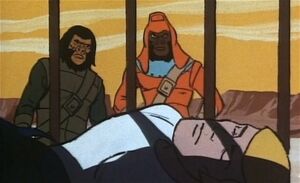 At the lab, Bill scores highly on all tests much to Zira's delight. Zaius is skeptical, so Zira gives Bill a simple puzzle to assemble. Disturbed, Zaius leaves for a meeting with the Council. Knowing the secret of the planet's evolution, he fears the intelligence 'Blue Eyes' is showing. Bill, growing impatient with keeping silent, verbally explodes in protest after Cornelius suggests doing a probe of Bill's brain to learn more about him. Zira and Cornelius are shocked. While Bill tries to explain who he is and where he came from, one of Urko's gorilla soldiers listens at the door. He quickly reports what he has heard to the Supreme Council, the only apes who know that at one time man ruled the planet, but destroyed his civilisation with war. It is written in Ape law that if man ever regains intelligence he could regain power and eventually destroy the world again.

Believing the soldier's story and fearing a human uprising, Zaius changes his mind and orders all humans, especially 'Blue Eyes', destroyed. Realising what is happening, Zira and Cornelius help Bill slip away into the night from the roof of the lab. When Zaius returns to further observe 'Blue Eyes', he finds Zira and Cornelius in a cage, pretending to have been beaten and overpowered by Bill when he "escaped." The order quickly goes out for the army to search the area for Bill, but he has reached the city limits and meets Nova and Jeff. Together, they break into an army stockade, steal a truck and haul all the humans away. Before leaving, they burn Urko's wagon cages. Soon they reach the mountains and block the pass by blowing up the truck. The humans need protection from both the elements and the gorillas, who will surely come after them. The two men decide to risk a trip to the Forbidden Zone to retrieve their laser from the ship. With it, they'll build a permanent fortress for the human tribe. Back in the city, Urko is enraged at the humans' escape and vows to have his revenge.[1]

Retrieved from "https://planetoftheapes.fandom.com/wiki/Escape_from_Ape_City?oldid=55547"
Community content is available under CC-BY-SA unless otherwise noted.