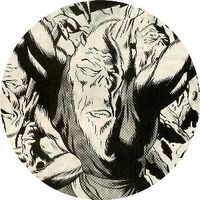 Dunzell's people - the Children of The Forgotten Apes - were trapped in a sub-basement in the Forbidden City. After Caesar's revolution, above in the streets, they were held captive by the surviving humans which fed them little food and water. As time went on, both species mutated. They were rescued by Alexander, but declined to move to Ape City.

Retrieved from "https://planetoftheapes.fandom.com/wiki/Dunzell?oldid=37044"
Community content is available under CC-BY-SA unless otherwise noted.