In 1972, presumably around the time of the June release of Conquest of the Planet of the Apes, KMPC radio personality Gary Owens hosted the 'Most Beautiful Ape Contest' in Century City, the complex used for much of the location filming on that movie. Owens crowned Dominique Green, contestant No. 2, the big winner of the title of 'The Most Beautiful Ape In The World' and a contract for a supporting role in the next Apes movie, Battle for the Planet of the Apes.[1]

The San Simian Sentinel promotional 4-page fake newspaper distributed free to first-run viewers of Battle informed readers that Green and her competitors "all wore bikinis or hotpants - but their heads were all covered with identical ape masks!". It also stated that Miss Green had "a face to match the quality of her shape, but there was no way producer Arthur P. Jacobs could cast 'The Most Beautiful Ape In The World' as a human. 'Circumstances have made a monkey of me' grumbled Jacobs."[2]

Paula Crist, who became involved in Apes convention appearances around the time of Conquest, said her initial approaches to 20th Century Fox led to her being asked to "do publicity for them in the East wearing mini-shorts and one of the masks, passing out pamphlets and so on... like the 'Miss Ape' contest with ape heads and bikinis. That was the big promotional gig."[3] 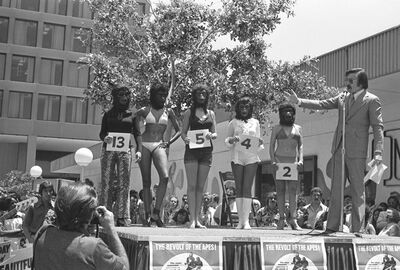 Retrieved from "https://planetoftheapes.fandom.com/wiki/Dominique_Green?oldid=23576"
Community content is available under CC-BY-SA unless otherwise noted.