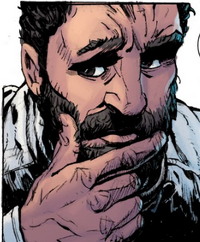 Dodge is an astronaut who along with his companions, Stewart, Paul LaFever, and John Thomas traveled from Earth to an unknown planet.

Dodge was shot by ape hunters during the initial encounter with the human natives. His body was discovered by Thomas to be stuffed and exhibited in a natural museum.

Retrieved from "https://planetoftheapes.fandom.com/wiki/Dodge_(Visionaries)?oldid=61258"
Community content is available under CC-BY-SA unless otherwise noted.