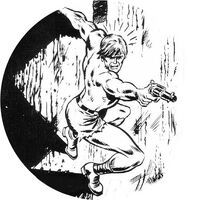 Derek Zane is a technological genius in 1970's New York who is convinced that Col. Taylor and his crew hit a time disturbance. Determined to prove his theory, Derek sets his time machine for 3975 and is thrown forward in time, destroying his machine in the process. He finds mute humans controlled by talking apes and is accused by gorilla General Gorodon of the murder of orangutan Xirinius. Fleeing across the sea, Derek discovers the island of Avedon where apes and talking humans live in equality but in the style of medieval times. He is accepted as a hero by the community and finds love with Lady Andréa. When Gorodon invades the island Derek leads the defence and kills Gorodon. Later, Derek again sets out to search for the astronauts.

Retrieved from "https://planetoftheapes.fandom.com/wiki/Derek_Zane?oldid=48339"
Community content is available under CC-BY-SA unless otherwise noted.