Planet of the Apes - Reimagined

Daena is a supporting main character and the love interest of Leo Davidson in the 2001 Planet of the Apes movie.

Daena was a rebellious female member of the human "Tek" clan, daughter of Sarai and Karubi, who lived in the jungles surrounding Ape City. Along with her father, Birn and Gunnar, she was captured by the slave driver Limbo and sold to the chimpanzee activist, Ari. She escaped with Leo Davidson into the Forbidden Zone and rallied her people into revolt against ape power. 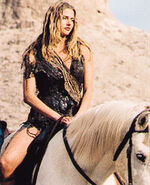 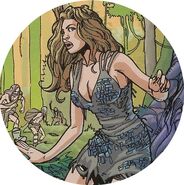 Retrieved from "https://planetoftheapes.fandom.com/wiki/Daena?oldid=59562"
Community content is available under CC-BY-SA unless otherwise noted.