Planet of the Apes Wiki
Register
Don't have an account?
Sign In
Advertisement
in: APJ Characters, Marvel Characters, Chimpanzees,
and 13 more

"Beware the beast Man, for he is the Devil's pawn. Alone among God's primates... he kills for sport or lust or greed. Yea, he will murder his brother to possess his brother's land. Let him not breed in great numbers... for he will make a desert of his home and yours. Shun him. Drive him back into his jungle lair... for he is the harbinger of death."
―Cornelius reading from the Sacred Scrolls [src]

Doctor Cornelius was a male chimpanzee of the original Planet of the Apes series, based on the character of Cornélius from the original novel, La Planète des singes by Pierre Boulle. He was the husband of Zira and the eventual father of Milo, who would grow up to take the name Caesar.

Early life and the coming of Taylor

An archeological scientist, Cornelius was reluctantly supportive of Zira's theories and views. He really would have preferred the quiet life with less controversy but deeply loved Zira and stood by her, though he did try to smooth over the confrontation with the orangutan elders and the gorilla soldiers. He himself had alarmed Zaius also by conducting digs in the Forbidden Zone, which threatened to undermine Ape society if he discovered what Zaius already knew. He was thus discouraged from further studies by the authorities. He grudgingly helped Zira defend George Taylor to the authorities and to escape subsequently but was cynical of Taylor's stories of an intelligent human race, and retained his respect for Zaius.

Leaving the Planet of the Apes

After Taylor's impact on their lives and their city, Cornelius and Zira were granted clemency but Zira was still bent on her ways of oppressing the views of the likes of General Ursus. Cornelius felt embarrassed and concerned whenever they attended public meetings because of Zira's better nature towards humans, such as the rousing speech made by Ursus to travel to the Forbidden Zone in search of new growth. When Taylor's love interest Nova brought the new spaceman Brent to Cornelius and Zira's home because he was looking for Taylor and they knew him, the chimp couple helped Brent on his way to looking for the missing Taylor as well as teaching him what to do and not to do if caught by apes.

In the third Ape movie we were informed that Zira and Cornelius, after the visit of Brent, travelled into the Forbidden Zone to visit their friend Dr. Milo, who had discovered and repaired Taylor's ship. Together, the three attempted to fly it but it launched onto a fixed return path to Taylor's time period and the Apes escaped just as the Alpha-Omega Bomb device destroyed the world.

Landing on Earth in 1973, the Apes were cautiously welcomed as a novelty by the bemused population. However, when they accidentally revealed details of Earth's final days and Zira became pregnant with a child that could spawn an intelligent Ape race, the human authorities became suspicious and ultimately plotted the deaths of Zira, Cornelius and their son (Dr. Milo having already died). When taken into detention, Cornelius didn't mean to kill the orderly, but he became angry at the orderly for teasing Zira who was heavily pregnant and for calling their unborn son a "little monkey", prompting Cornelius into throwing the tray and knocking the man down and because of Cornelius's greater strength, the orderly was dead. Fearing what will happen to them, Cornelius and Zira escaped the detention building and ran to go into hiding in the wild. Having made friends with Lewis Dixon and Stephanie Branton, they hid themselves at Señor Armando's Circus, allowing Cornelius to help his wife deliver their son.

Escaping, they were tracked down to a disused boat, where they were finally killed by Otto Hasslein despite Cornelius' attempt to defend himself and his family. The child, initially named after Milo but subsequently renamed Caesar, had been saved however, and would eventually do just what Hasslein had feared. It is unknown if Cornelius knew that Zira switched their son with the circus baby chimp Salome or if they planned to rejoin Armando's circus and change the baby chimps back again.

Many years later, Caesar named his own son after his father, whom he had never known because he was too young to remember them. Curious to know what his parents were like in life, Caesar travelled back to where he led his revolt to learn of his ancestry. With help from Bruce McDonald, Caesar accessed the city archives and watched a recording of Cornelius and Zira's interrogation, taking pride in seeing his parents and noticing the "father like son" resemblance.

In BOOM! Studios' Planet of the Apes: Cataclysm, Cornelius' past is explored further. His research on humans was interrupted by the Anti-Vivisection Society led by Prisca, shortly before the destruction of the Moon. In the aftermath Cornelius tried to save the chimpanzee Cassia, but she was killed. He later encountered Cassia's sister Zira and her son Lucius. Zaius appointed Cornelius part of the team, with Milo and Vitus, to travel to Painted Valley in search of provisions. On his return he broke his promise to Zaius by revealing the history of Painted Valley to the chimp radicals of Ape City, but did not share their enthusiasm to stage a bloody coup. After briefly showing an interest in Timon's cult of Aleron, Cornelius helped avert an ape civil war by calming the rioting chimps. He, Zira and Lucius were telepathically urged by Milo's mutant friend to join him at the site of his repaired space craft, where Lucius was shot by the gorilla army.

In the inter-company crossover Star Trek/Planet of the Apes: The Primate Directive, Cornelius and Zira aided Captain Kirk and his crew against the mad gorilla general Marius. Cornelius was surprised to learn of more humans that could speak, telling Kirk that humans are seen as mere livestock on their world. However they did agree to help Kirk because he told that an alien race was giving military aid to the gorilla factions. Cornelius also met the Enterprise engineer, Mr. Scott, who told him about time travel. Marius' gorillas were dispatched, and after the threat was ended, Cornelius and Zira bade farewell to Kirk and his crew. Later, Cornelius, Zira and their colleague Milo found themselves in space in Taylor's repaired ship. Cornelius suggested using the ship to travel through time. Milo dismissed it, but Cornelius had with him one of the Enterprise Tri-Corders which had instructions on how to go back in time instead of forward.

The 2018 novel Death of the Planet of the Apes seeks to explain the change in Cornelius' fortunes between each of the three movies. After Taylor's final departure for the Forbidden Zone, there is a rapprochement with Zaius, prompted by his need for allies against Ursus and Sabian. Thus, Cornelius is promoted to Deputy Minister of Science, and he and Zira are appointed to the Citizen's Council, and are married by Zaius. In their new positions they discover yet more secrets of ape history, such as the Lawgiver's true identity and the story of Aldo, and are forced to flee Ape City to Milo's spaceship repair site. 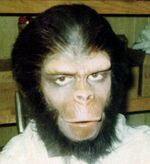