Cornelius is a character from the original novel, La Planète des singes by Pierre Boulle. In the first three Planet of the Apes films inspired by that novel, Cornelius was played by Roddy McDowall and by David Watson. The name Cornelius also appeared in other interpretations of the Planet of the Apes mythos and may refer to the following characters: 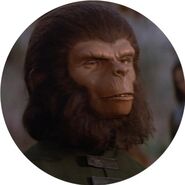 Cornelius (CE)
Add a photo to this gallery

Cornelius was a male chimpanzee, the fiancée (later spouse) of Zira and the eventual father of Milo, who would grow up to take the name Caesar.

An archeological scientist, Cornelius is reluctantly supportive of Zira's theories and views. He really would prefer the quiet life with less controversy but deeply loves Zira and stands by her, though he does try to smooth over the confrontation with the orangutan elders and the gorilla soldiers. He himself has alarmed Zaius also by conducting digs in the Forbidden Zone which threaten to undermine ape society if he discovers what Zaius already knows. He is thus discouraged from further studies by the authorities. He grudgingly helps Zira to defend Taylor to the authorities and to escape subsequently but is cynical of Taylor's stories of an intelligent human race, and retains his respect for Zaius.

In the third ape movie we are informed that Zira and Cornelius, after the visit of Brent, traveled into the Forbidden Zone to visit their friend Milo, who has discovered and repaired Taylor's ship. Together the three attempt to fly it but it launches onto a fixed return path to Taylor's time and the apes escape just as the Alpha-Omega device destroys the world. Landing on Earth in 1973, the apes are cautiously welcomed as a novelty by the bemused population. However when they accidentally reveal details of Earth's final days and Zira becomes pregnant with a child that could spawn in intelligent ape race, the human authorities become suspicious and ultimately plot the deaths of Zira, Cornelius and their son (Milo having already died). Escaping, they are tracked down to a disused boat, where they are finally killed by Otto Hasslein. The child, named after Milo, has been saved however, and will eventually do just what Hasslein feared.

In the franchise reboot by Chernin Entertainment, Cornelius is the name of Caesar second-born infant son.

Retrieved from "https://planetoftheapes.fandom.com/wiki/Cornelius?oldid=58110"
Community content is available under CC-BY-SA unless otherwise noted.