Cornélius, a great chimpanzee scholar, was the fiancé of Zira, the chimp who had found an astonishing human called Ulysse Mérou, who could talk and claimed to be from another planet.

A brillant chimpanzee scientist of the Academy, he was informed by his fiancé Zira of the existence of an intelligent man in her care. The two scheduled a secret meeting at the park in the city so as Cornélius could see this man for himself. He was interested and was initially skeptical, but upon meeting the human he was enthralled to learn that Ulysse came from a world where man ruled, wheras apes were savage animals. He was particularly interested in the account of how homo sapiens aroused on Earth, as he had been trying to research the origins of simian society. Sympathising with the unusually intelligent human, he agreed to help Ulysse regain his freedom at the Ape Council. He schooled Ulysse, helping prepare his speech during a scientific conference.  After Zaius was ousted as head researcher of the Institute, Cornélius assumed his position, taking Ulysse as a fellow collaborator. Ulysse ultimately needed to return to his own planet, and so it was Cornélius that secretly arranged for Ulysse to return to his spacecraft. 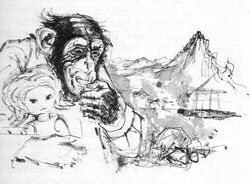 Retrieved from "https://planetoftheapes.fandom.com/wiki/Cornélius?oldid=56393"
Community content is available under CC-BY-SA unless otherwise noted.