Planet of the Apes Wiki
Register
Don't have an account?
Sign In
Advertisement
in: Chimpanzees, Apes, Animals,
and 3 more

Chimpanzees have a standing height of 3.3–4.6 ft tall. Adult males weigh between 88–132 lb while females weighing between 60–110 lb. The build is more robust than the bonobo's but less than the gorilla's. The arms of a chimp are longer than its legs, and can reach below the knees. The hands have long fingers with short thumbs and flat fingernails. The feet are adapted for grasping, the big toe being opposable. A chimp's head is rounded with a prominent and prognathous face. It has forward-facing eyes, a small nose, rounded non-lobed ears, a long mobile upper lip and, in adult males, sharp canine teeth.

Chimpanzee bodies are covered by coarse hair, except for the face, fingers, toes, palms of the hands, and soles of the feet. Chimps lose more hair as they age, and develop bald spots. The hair of a chimp is typically black but can be brown or ginger. As they get older, white or grey patches may appear, particularly on the chin and lower region. The skin may range from pale to dark, females develop swelling pink skin when in oestrus.

Chimpanzees are adapted for both arboreal (travelling by trees) and terrestrial locomotion. Arboreal locomotion consists of vertical climbing and brachiation. On the ground chimps move both quadrupedal and bipedal, which appear to have similar energy costs. As with bonobos and gorillas, chimps move quadrupedal by knuckle-walking, which probably evolved independently in Pan and Gorilla. The physical strength of chimps is around 1.5 times greater than humans, due to higher content of fast twitch muscle fibers, one of the chimpanzee's adaptations for climbing and swinging.

The chimpanzees are one of the primary known species of all apes within the Planet of the Apes franchise, and also the majority of the population, which is ironic because there are fewer than 300,000 wild chimpanzees in the world today. In the original Planet of the Apes film series chimpanzees were considered intellectuals, scientists, doctors, and citizens of the ape society. 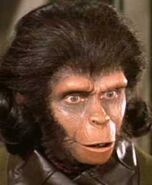 Zira - a chimpanzee depicted in the original APJAC film series

Caesar - a chimpanzee depicted in the Chernin Entertainment film series