Planet of the Apes Wiki
Register
Don't have an account?
Sign In
Advertisement
in: Characters, Male Characters, CE Characters,
and 6 more

"And as for Caesar, kneel down, kneel down and wonder."
―Charles Rodman to infant Caesar, quoting Shakespeare [src]

Once a talented pianist and professional music teacher who earned a honorary certificate, Charles began to suffer from Alzheimer's Disease, which his son (either through coincidence or design) researched a cure for at the Gen-Sys Laboratories. He had been cared for by a nurse named Irena, but she eventually couldn't stand Charles' behavior due to Alzheimer's Disease and believed that he was better off at a shelter.

Although trials of the "ALZ-112" were called off, Will secretly stole canisters of the drug and adopted the baby chimpanzee that Charles named Caesar, who had been exposed to the drug via the embryo. Three years later, noticing its effects on Caesar, he administered the drug to Charles, who immediately recovered his mental abilities and was once again able to play the piano. For five years they lived a happy life, with Charles taking care of Caesar when the chimpanzee was a newborn.

Charles came on bad terms with a neighbor named Douglas Hunsiker on two occasions. The first time was when Hunsiker used a baseball bat in an attempt to strike Caesar when he entered his garage to ride a bicycle, with Charles hesitantly stating, "He just wanted to play". The second and worst time was when Charles, having become resistant to the ALZ-112 and suffering once again from Alzheimer's, got into Hunsiker's car and tried to drive it, damaging the front and back by bumping into the cars it was parked between. Hunsiker grabbed Charles out of his car and decided to call the police. Charles tried to grab the cell phone away from Hunsiker and explain. Caesar saw the situation through a window and although not aware of why Hunsiker was angry at Charles, was aware that his grandfather figure was being threatened. To save him, Caesar attacked Hunsiker. After Caesar bit Hunsiker's finger off, Charles yelled at Caesar to stop. This was their last moment together when Caesar and Charles hugged each other, fearing what consequences awaited Caesar.

After Ceasar's incarceration at the San Bruno Primate Shelter, Charles' condition continued to deteriorate. Later, Will tried to test the ALZ-113 on Charles, but he refused and died the next morning from Alzheimer's. It is unknown if Charles had some suspicions of the devastating effects of the ALZ-113 on humans, or if he figured it was his son's time to let him die naturally.

Due to his good nature and practically helping raise Caesar throughout the latter's childhood, Charles served as one of the main reasons that Caesar was able to see genuine goodness in humans, which is why, despite being untrusting of most humans, still held an amount of compassion and respect towards them. This is further shown when he allowed Malcolm and his small group to work on a dam to restore power to their colony in San Francisco, allowing him to see good qualities in other humans and use it as an opportunity to make a potential peace with them.

Despite suffering from Alzheimer's, Charles was a kind-hearted man who greatly loved his only son, Will. He immediately took a liking to the baby chimpanzee he and Will later named Caesar and said a seemingly prophetic line from Caesar's namesake, Shakespeare's Julius Caesar text. He also came to think of Caroline as a daughter and Caesar as a grandson as shown when visibly he was distraught when Caesar was taken away and placed in the primate shelter. 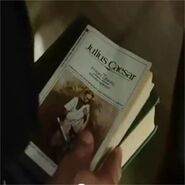