Planet of the Apes Wiki
Register
Don't have an account?
Sign In
Advertisement
in: APJ Characters, Humans, Living Characters,
and 4 more

Chairman of the President's Committee of Inquiry

The Chairman of the President's Committee of Inquiry

The Chairman of the President's Committee of Inquiry led the board "consisting of leading experts in all fields relevant to a situation whose implications - whether zoological, biological, psychological, medical, mathematical, historical, physical or even spiritual - are numberless". In 1973, they were tasked by the President with finding an explanation for how Zira, Cornelius and Milo had emerged alive from a spaceship thought lost two years earlier. In 1991, a recording of the Chairman's final report was played to Armando by Governor Breck.

Years later again, Caesar (the son of Zira and Cornelius), MacDonald and Virgil travelled to Breck's ruined city to search the archives for recordings of Caesar's parents. They located the tape labelled 'Proceedings of the Presidential Commission on Alien Visitors, 1973' , which included Cornelius' testimony before the Committee (though his mention of the name 'Aldo' had apparently been edited out) and secret recordings of Zira made by Dr. Hasslein. 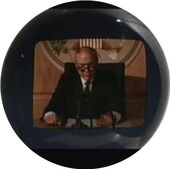 The Committee comprised of eight experts. Aside from the Chairman, these included, according to the screenplay, a Naval Officer, Dr Hasslein (Presidential Scientific Advisor), an Army Officer, a Lawyer and a Cardinal. Sitting to the right of the Chairman was a man identified in the screenplay as a Scientist. Seated at the right end of the Committee table was a member who reporters addressed as Senator. The novelization also noted Doctor Raymond Wilson, a naturalist specializing in the great apes, who was added as a member later. Doctor Lewis Dixon also stated that he was a member, though he didn't sit with them at all of their meetings.[4]