Planet of the Apes Wiki
Register
Don't have an account?
Sign In
Advertisement
in: CE Characters, CE, Male Characters,
and 11 more

Carver was a member of Malcolm's Group who used to work at a dam. He was responsible for shooting Ash, alerting the apes to the existence of remaining humans and triggering tensions between the two species. Carver was a despicable redneck who was deeply suspicious and prejudiced against the apes (blaming them for the Simian Flu outbreak), often causing discomfort with his human comrades.

Prior to the Simian Flu Pandemic, Carver was a water worker who used to work at a dam in San Francisco. However, when the pandemic began, he ultimately blamed the apes for causing the outbreak, despite the fact that the virus was created by scientists at Gen-Sys Laboratories.

Ten years after the Ape Rebellion, he stumbles across two young chimpanzees, Ash and Blue Eyes in the forest. Panicking and out of fear, he accidentally shot Ash, alerting the nearby apes. When the other apes arrive on the scene, Malcolm (the human leader) attempted to assure the apes his group doesn't mean any harm, Carver scolded Malcolm for talking to the apes, thinking they are simply dumb animals. He was proven wrong when Caesar and the other apes shouted at them to leave the forest. On the way back to their colony, he was still visibly shaken about how the apes could talk, but this wasn't believed by the colony's leader Dreyfus, who thought it was impossible and told them to keep silent over the incident.

Later, Carver and the other humans pay witness to Caesar and his ape army arriving in the city and it is here where his statements about the apes talking are proven true to Dreyfus as Caesar warns the humans to stay out of ape territory or there would be war otherwise. Because he once worked at the dam before the Simian Flu outbreak and understood how to work it better than the others, Carver was brought on Malcolm's expedition to the river dam just beyond the Ape Village, although Ellie was hesitant on Carver coming along again due to him already angering the apes by shooting Ash.

Working on the Dam

Carver then accompanies Malcolm and the others to the ape forest, he is told to stay in the car while Malcolm goes to speak with the apes about letting them stay. The group wait for Malcolm for a few hours but when the apes start to come to them they attempt to flee but notice the car won't start.

Carver, gets his gun ready until Malcolm tells him they have to give up their guns in order to be able to stay in the village. At night, Carver sits by the camp-fire with a the other members of Malcolm's Group. He and Ellie get into an argument about who's to blame for the Simian Flu after Ellie defends the apes, as she worked with the CDC and verified that the disease was man-made, though Carver coldly retorts that he has no one else to blame for ruining the world besides the apes. To make matters worse, he coldly reminds Ellie and Malcolm of how their loved ones fell victim to the Simian Flu, until Foster angrily silences him.

Carver along with Malcolm and Foster worked on the dam until an explosion occurs, trapping them inside. They were saved by the apes (Rocket doing so reluctantly). Afterwards, Carver is tended to by Ellie due to being suspected of having a broken leg until Caesar's youngest son Cornelius crawls over to play with them. As the group and the apes begin to bond, Carver bluntly ruins the moment by asking what they are doing when Cornelius become fascinated with a box of supplies and has uncovered his hidden gun, causing Carver to shoo him away.

Blue Eyes, Caesar's eldest son, hits Carver and attempts to rescue his little brother only for Carver to point his gun at him, prompting Caesar to wrestle the weapon from Carver's hands. Caesar attempted to batter Carver with the gun only for Malcolm to quickly stop him. Caesar angrily examined the gun, angered at the humans for not only defying his orders of no weapons but for also attempting to harm his children. The ape king proceeded to aim the gun at the humans before throwing the weapon over the dam wall and exiled the group from the woods, much to their dismay.

After Malcolm promised Caesar he didn't have any idea that Carver had the weapon and that he will get rid of him to make up for the incident, Malcolm has Foster dump Carver in the middle of the forest to ensure he doesn't do anything else stupid, locking him in a car overnight. Malcolm and his group later get the dam working again, and upon seeing the power back on Carver happily lights a cigarette. His happy shouting, however, alerts Koba, who finds Carver and beats him to death, taking his baseball cap and lighter as trophies which he later uses to frame the humans for shooting Caesar and setting the Ape Village ablaze.

Carver had an attitude similar to that of Koba as they both despised and distrusted each other's respective races. He also had a paranoia issue when it came to the apes as evident when Caesar and Cornelia's younger son Cornelius wanders over to Ellie and Alexander, he even had a violent streak as he attempts to harm Blue Eyes and Cornelius with Caesar and his fellow humans watching on. This action would eventually lead to his deserved death at the hands of Koba.

Carver was also known to disregard obvious facts; like the fact that the Simian Flu was created by human scientists and that the apes were not responsible for humanity's near extinction. Carver also did not take to notice the amount of kindness that the apes had possessed to save his group from certain death or the peacefulness between the apes and humans as seen when Ellie and Alexander were playing with Caesar's infant son Cornelius. Carver was beyond wary of Caesar and the other apes, going so far as to hide a gun, fearing the apes would turn on him and his group; this action of his, got him thrown out of Malcolm's group.

Carver's horrible behavior and unwillingness to trust the apes would only further fan the flames of aggression between Koba and the other apes, due to his selfish and paranoid actions. Unlike Koba and the others, he did not have a charisma and only used brute strength and guns to threaten apes, even though they were kind to him, as he could have possibly killed an innocent infant chimpanzee.

Carver with Ellie, Alexander and Malcolm. 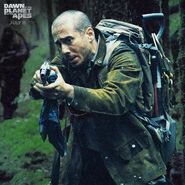 Carver aims his gun at Blue Eyes and Ash.

"Who the hell else am I going to blame? They are already wiped out half the planet". - Carver.

Carver scolds Malcolm for talking to the apes.

Carver points his gun at Blue Eyes and Ash.

"They're apes man! You think they understand what you're saying". - Carver to Malcolm.

Carver attempts to attack Baby Milo but is attacked by Blue Eyes.
Community content is available under CC-BY-SA unless otherwise noted.
Advertisement